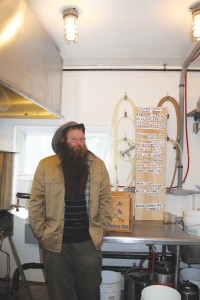 by Laura Rodley
The secret of success is to make room for bringing your ideas to life, and allowing them to ferment. And if you are artisanal brewmaster Justin Korby very quickly, stores will call you up and ask to stock your beer even though you began by selling beer only through CSAs. Over this past holiday season Korby sold out of almost all the beer he had made.
Korby rode the back of the local beer movement, a revived interest in local beer and breweries, to start his own brewery in 2012 on his 74 acre farm. He asked his father, retired engineer Ken Korby, to design and build his initial backyard three container brewery.– –Perfect for the backyard brewer and for test-driving his ideas. People loved the beer he produced.
“What excited me was to make beer from here, doing it as a CSA.” Through word-of-mouth and advertising, he sold 50 beer CSAs at $400 each that allowed him to buy some of the equipment, such as a Buchmann Boilmaker, and build the 360 square foot brewery 20 feet from the backdoor of his circa 1780s house in Colrain, MA., “Probably one of the smallest breweries in New England,” using ingredients almost 100 percent locally sourced.
Open all year, Korby caters to his customers’ desire for variety by offering 43 different styles of beer. Each month they can buy 10 to 12 different beers, including Colrain Living, The BeeZerker, or Braggit, a mix between mead and beer. He gets his honey from Warm Colors Apiary in South Deerfield. One beer is named Ghost Hog, inspired by conquering a groundhog problem that bothered their homestead garden.
Another draw is that most breweries aren’t right on a farm. He works on the one barrel system, brewing 31 gallons of beer at a time. Most larger breweries do many more, but he wants to stay manageable, as he is a “one man gang.”
“Originally we were only going to a beer CSA, but we had extra beer. Some stores approached me; right now I am in eight stores. I let stores call me. My business model is not set up to have beer in 100 stores. I don’t want to overextend myself,” seeking to be sustainable. Spent grain is fed to their hogs.
While he grows some of his own hops, he buys hops from Four Star Farm in Northfield, and his grain from Valley Malt in Hadley, “the only malt house east of the Mississippi,” in 2012. Now there are a few more micro maltsters.
“Massachusetts has a revitalization with hops and grain growing, sort of been with those companies from the beginning,” he said. A maltster takes the grain and converts it to make more sugar available from the grain to make beer. “Can’t take raw grain from the field and make beer out of it.” Valley Malt is doing small-scale malting, and farmers bring their grain to her.
“Everyone’s pretty friendly. A lot of people want people to be making good beer. We help each other out, trying to get more people interested in small beer makers rather than big breweries. The better beer craft breweries make, the more people buy.” As the craft beer movement has gained momentum, new ones pop up, such as Brewmaster’s Jack, Greenfield’s The People’s Pint, and Brick and Feather in Turner’s Falls.   He has collaborated with Artisan Beverage Cooperative and works there part time, getting into the zen of bottling for them, until spring when he gears up full steam again, and gives beer tasting events.
Korby didn’t go to a bank to get a loan to start his business, noting that most businesses are cash-flow based. “The hardest part is that it takes a month to make the beer.” He wanted to do as much as he could and not get far into debt. Neighbors and friends offered loans. “I never went to business school.” He read books. “They talk about borrowing enough to cover your rent first. I would have taken more debt early; having a baby, added to the stress. Learned a lot by doing it the hard way, not borrowing, relying on the brewery to make a profit right away. It made a profit right away, but not enough to support a family right away. ” He was formally a stonemason, which is why he named his brewery, Stoneman Brewery.
Initially he did double brewing three days in a row. “The first year was pretty brutal as far as time goes.” Buying two more fermenters gave him more breathing room. He had six fermenters that had to be full all the time, now he has eight. His wife Katie worked as fermenting manager at a local natural pickling company. She left to help him with his fermenting process, and has since returned to her position.
“I really like the variety. We don’t focus on one specialty beer. There’s half a dozen that we have all year round. For stores, we do have to have some consistency.”
His beer conditions after it is bottled for two weeks in a room specially heated to 70 degrees attached to his brewery, going through a second fermentation in the bottle after a little bit of sugar is added to it that creates its carbonation. “Trying to get the numbers exact is kind of difficult. Can be over carbonated or under- hard to get it just right. It’s a lot more work, (than in the bigger breweries) fermenting it in our own bottles. Completely unfiltered, a living beer,” which is why it is an artisanal beer, with a unique taste, sought after and here to stay.