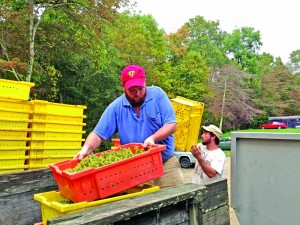 by Sally Colby
When Nick and Happy Smith purchased a 58-acre property in Stonington, CT, they were moving from a fast-paced corporate world to a completely different world: farming. Smith’s dream was to make his own wine and he set out to do just that.
The property included a small vineyard with five wine grape varieties commonly grown in the region. When winemaker Mike McAndrew joined the Smiths in 1987, the same year Stonington Vineyards was established, he decided that two varieties would suffice.
“We tore out all the hybrids,” he said. “Now we’re growing Chardonnay and Cabernet Franc on the best parts of the property. Those are the two that have the most value to us — the others we can purchase from other growers in our region.”
McAndrew studies European wine grape growing and has found that their growing model is sound for Stonington. “We’re in the southeastern New England appellation, and there are growers who are producing more than they can use,” he said. “They provide enough excess fruit for our other wines.”
To coordinate growing with winemaking, McAndrew works closely with vineyard manager Linda Mason, who does all of the pruning and tying, and also manages a crew throughout the season. “She does all of the hands-on work, I do the spraying,” he said. “Linda is in charge of the crew for leaf pulling, trellising and bringing in the crop in fall.” McAndrew says that the goal is to keep the vineyard pristine and attractive. “We’ve been fine-tuning the vineyard for quite a while, and we have a great crop this year; both quality and quantity.”
The vineyard, which is about 2/3 Chardonnay and 1/3 Cabernet Franc, is in a hilly area with a distinct crown, so vines have the advantage of good slope. Soil tests are conducted every few years, and McAndrew says that as a result, they do very little fertilizing; mostly foliar sprays with magnesium and Epsom salts. “The soil is good, and doesn’t need a lot of amendments,” he said. “Sodded row middles help, and we burn weeds under wires. We try to keep the soil covered wherever possible to prevent runoff.”
One of the main pest issues at Stonington is deer. McAndrew says that three-strand electric fence on fiberglass posts has been effective in keeping deer out. “The fence goes up around Labor Day and we take it down after harvest,” he explained. “We surround the entire 10 acres and it works well. We hang foil packets of peanut butter on the fence — it brings the deer right up to the fence and they learn to respect it.” McAndrew says that it takes one person one day to put the fence up and one person to take it down after harvest. Prior to fencing, losses were about three to four tons of fruit/year, but losses are close to zero now.
Both Mason and McAndrew watch closely for signs of disease, and are proactive with spraying. “We start early and finish late,” said McAndrew as he described the spray schedule. “It’s a matter of being out in the vineyard, checking the weather and staying out there on the sprayer. We usually plan on spraying every seven to 10 days.”
Current annual production is between 9,000 and 12,000 gallons. “We’re concentrating on selling wine at the winery,” said McAndrew. “We’re planning to grow as sales grow, but we always source fruit from other growers if we need to.”
Stonington Vineyards is currently undergoing a major renovation, which fans are following through Facebook. Rachel Edwards, who handles publicity, web page and social media, says that the renovation doesn’t involve a new building, but an improvement of the existing structure. “It will still reflect the experience we want to provide,” she said. “Warm, intimate and approachable. We’re raising the visual part of the inside to match the rest of the experience.”
Prior to the renovation, visitors walked into the winery and right to the bar space. “The goal is to provide a better sense of engagement with the outside area and overall property, including more outside seating and bar area,” said Edwards. “The entrance will be more defined. There’s a gift shop, and the tasting room will have a higher ceiling with skylights. An exterior wall was removed and replaced with 16 ft. sliding glass doors for visual appeal and to bring in more light. We’re using natural stone from the area, and the outside-inside flow will be much better.”
To accommodate guests throughout the renovation, the entire tasting room was moved to a five-car garage. “People are excited about the renovation,” said Edwards. “Even though it isn’t as pretty on the outside, the customers have enjoyed watching the transformation. We opened the wall early in spring so people could see what was going on. All of the architectural drawings and sample materials are in the temporary tasting room so people can see what we’re doing.”
The winery features two large festivals each year — one in June, another in September. The weekend-long events include wine tastings, bands and local artists. They draw several thousand visitors. Edwards says that Stonington sells a lot of wine during the festivals, although that isn’t the main goal. “The festivals attract people who might not do the wine trail. We have activities for children, and we see a lot of new faces as well as regular customers,” she explained. “One of the things we love about the festivals is that it’s a great way to draw new people to the vineyard.”
Visit Stonington Vineyards’ Facebook page to follow the renovation, and learn more about the winery at www.stoningtonvineyards.com