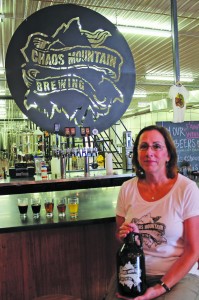 by Karl H. Kazaks
CALLAWAY, VA — Within just a few months of opening, Chaos Mountain Brewing has already been noticed and honored for its place in Virginia’s craft brewing industry.
At this year’s Virginia Craft Brewers Festival, held in late August, 51 breweries submitted 221 beers in 23 categories to be reviewed by 28 judges. Chaos Mountain’s took home silver in the stout category for its Coco Borealis and gold in the strong Belgian ale category for its Agents of Chaos.
“We were pretty humbled to be honest,” said Joe Hallock, who is the co-owner of the brewery along with his wife, Wendy. “We have to keep telling ourselves it’s only been four months.”

More than 700 people attended Chaos Mountain’s grand opening on May 3. Three months later, the brewery garnered its first award, at Microfestivus, Roanoke’s microbrew celebration, taking home Best Belgian Style Ale for its Belgian quad, 4 Mad Chefs.
The fast start and early success hasn’t come out of nowhere, however. For years, Hallock was a home brewer, perfecting recipes for what have become Agents of Chaos and 4 Mad Chefs.
The latter beer was able to stand out at Microfestivus in a field consisting of a wide variety of ales, including blondes and craft classics like Ommegang’s Three Philosophers.
Hallock admits to being inspired by Ommegang’s quad when creating 4 Mad Chefs. He described 4 Mad Chefs as “a very easy drinking, very approachable Belgian quad. Even at 8.5 percent abv the alcohol doesn’t show through.”
Agents of Chaos is a bit stronger, at 10.0 percent. It has a lengthy grain bill and a just a small amount of hops. Its flavors include, Hallock said, “dark fruits, figs and plums. It changes character as it warms up. It can easily sit in a cellar for a year.”
The Hallocks and their Head Brewer Will Landry are working out of a 20,000 square foot building that previously was the home of a manufacturing business in which Hallock once was partner. The team, which includes the Hallocks’ son Ben, did most of the renovations themselves — from painting the walls to chiseling out the concrete floor to installing drains.
But prior to all of that, the Hallocks spent a year researching whether opening a commercial brewery made sense for them. They only wanted to open if they could start off positioned to have the best chance of success.
So the Hallocks traveled the country and to Europe both to sample beers and, Hallock said, “to rally look at what everyone in the craft market has done.” The Hallocks decided that they needed to do a few things to get off on the right foot.
First, have package beer. “Otherwise you’re dependent on the draft market,” Hallock said, “which is constantly in flux.”
Second, have a pilot brewing system, both to test out specialty and new beers and to give their regular customers at their tasting room an incentive “to come back and see what’s new.”
The tasting room at Chaos Mountain is open Thursday-Sunday. Food trucks are present on most of those days. Their stronger Belgian ales are served in nine-ounce snifter glasses.
Inside the brewery, there are two brewing systems — a seven-barrel system and a 30-barrel system. All of the beer from the seven-barrel system goes into draft (Chaos Mountain uses half-barrel and tall quarter-barrel kegs, no sixth-barrel kegs), almost all of which is served from the tasting room. A few local restaurants do buy the specialty brews.
Finally, “and most importantly,” Hallock said, they took the “time to wait to open, not rush into things.” They had all of their year-round beers packaged and ready to be in stores before their grand opening.
In addition to the stronger Belgian ales, the permanent lineup at Chaos Mountain presently includes the stout, Squatch Scotch Ale, Mad Hopper IPA and Cheeky Monkey Belgian Blonde Ale.
The blonde ale, said Landry, is slightly darker and slightly maltier in body than a typical Belgian blonde, thanks to the inclusion of Maris Otter English malt. Coco Borealis is a triple chocolate stout, with two different chocolate malts. Cocoa powder is included in the boil, and cacao nibs are added post-fermentation.
Right now just those six beers are packaged, but next year toward the end of spring Chaos Mountain may add to its lineup of bottled beers a Czech pilsner. Cross Czech, as it’s called, was very popular when produced from the pilot draft system.
Next year, in its first full year of production, the brewery would like to brew 3,000 barrels. There is room in the brewery to add more fermenters to increase production. The limiting factor is ceiling height.
The seven-barrel system is electric while the 30-barrel system uses steam. All of the equipment for the larger system and most from the smaller system were sourced from DME Brewing. The brewery does have its own yeast propagation tank.
“With this we don’t have to buy a 30-liter yeast pitch,” Landry said. “We can start with a four-liter yeast slurry and grow it up ourselves.”
Chaos Mountain would like to expand throughout Virginia and perhaps into the Washington, D.C., market.
“Our start has exceeded expectations,” said Hallock. “We’re very happy to be where we are this quickly and kind of feel lucky to be this far along.”