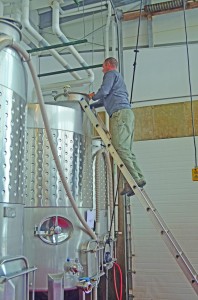 by Sally Colby
Sugarloaf Mountain is a prominent knob that rises above the surrounding rural landscape, providing hiking trails and recreation for people in the suburban Baltimore and Washington D.C. area. It also draws people to Sugarloaf Mountain Vineyard, situated at the base of the mountain.
“It’s seven miles long, and quite the draw for people in the area,” said Tasting Room Manager Susan Reed as she described the well-known mountain. “They’ll hike the mountain in the morning, then stop here in the afternoon for a picnic and have a bottle of wine.”
Shale, clay and sand, combined with a unique microclimate at the base of Sugarloaf Mountain, provide an ideal setting for a vineyard. After soil tests, several years of cover crops and infrastructure including irrigation and trellising, 19,000 French-certified vinifera vines arrived in Maryland to start Sugarloaf Mountain Vineyard.
The winery was constructed in 2005 and equipped with state of the art wine-making equipment. Several years later, the tasting room opened.
From May through October, Sugarloaf Mountain Vineyard features live outdoor music events every weekend. From November through April, it’s quieter, but the tasting room is open year round, closed for only a few major holidays. Like other successful wineries, Sugarloaf Mountain enjoys repeat customers as well as new patrons who arrive by word of mouth. “We made the decision in 2011 to stay open seven days a week,” said Reed. “That’s been a benefit because people don’t have to think about the hours — they can come out any time.”
Bud break weekend in April starts the busy season. “It’s when we release our new vintage — the whites and rose,” said Reed. “We bottle in March and release them the first weekend in April.”
Prior to initiating a wine club in July 2011, Sugarloaf had an informal club. Now, 380 active members of the Bacchus Club enjoy retail discounts, barrel tastings and free tickets to the winery’s Stomp Festival. “We opened up a register specifically for our wine club members,” said Reed. “On our busiest days, they can go through the express lane. It has helped us cultivate more members, and it makes them feel special if they don’t have to stand in a line.”
Reed uses social media to promote events and keep customers apprised of what’s happening at the winery.
The winery conducts several fundraisers each month. At first, the events helped bring new customers, but Reed says it was a balancing act; one of the things that comes with gaining popularity. “We have people who enjoyed it in the beginning when we were a quiet little winery,” said Reed. “But many of those regulars avoid coming on weekends when we have something else going on. We’re going to concentrate on the business that comes here, and the Stomp Festival.” Reed says the popular Stomp Festival includes a stage with three half-barrels and contestants can stomp grapes ‘I Love Lucy-style.’
Reed says demographics have changed since she started at the winery six years ago. “When I came on board, the demographic was 35 to 65,” she said. “We were number 12 in the state to register as a winery. Now there are 68 wineries — it has grown very quickly. The interesting thing is that we have a new group of people who are interested in wine. We have to do a lot more carding than when we started. But they’re very knowledgeable wine drinkers and it’s been fun to watch.”
Winemaker Manolo Gomez, who started at Sugarloaf in the vineyard, was working in a brewery in Peru before coming to the United States. He received training through U.C. Davis, as well as personal training under the tutelage of a French winemaker. He recalls that the vineyard owner Mike McGarry assembled a top-notch team to start the vineyard in 2002. “We were thinking about which grapes would make good wine, so we decided to make Chardonnay, Pinot Grigio and Viognier,” said Gomez. “Reds include Bordeaux style wines such as Cabernet Franc, Cabernet Sauvignon, Merlot, Petit Verdot and Malbec, which are similar to what would be made in the Bordeaux region of France. I also make three blends: Circe, Comus and EVOE!”
Gomez works closely with the vineyard manager throughout the growing season. “It’s true about the phrase everyone uses — ‘good wines come from the vineyard,’” said Gomez. “If he provides me with good grapes, I can easily make good wine.”
As harvest is near, Gomez keeps a close eye on the grapes, using several analyses including pH, brix and TA. “I also taste the grapes,” he said. “Sometimes you have perfect numbers in the lab, but the taste is not ready,” said Gomez. “If the fruit tastes good and the numbers are good, that’s the ideal situation, but we have to talk about if we’ll wait or pick.”
Weather is also a factor, so if rain is predicted, picking might be at 23 brix instead of 24 or 25.
As the winemaker, Gomez is present at the winery every day, keeping a close watch over wine in stainless steel barrels in three sizes — 1,040 gallons, 720 gallons, and 250 gallon stackable tanks. Production totals between 5,000 and 6,000 cases each year.
Gomez meets with case club members every Saturday and Sunday, conducting private tastings and talking about wine. “They ask me a lot of questions about the process,” said Gomez. “We talk about whatever they want.” The winery currently has about 300 case club members, and close to 30 people will visit the winery on each of the two weekend days.
In 2013, Sugarloaf Mountain Vineyard was named ‘best vineyard’ in the Washington Post for the second consecutive year. Sugarloaf wines have received numerous medals in competitions, including Silver medals for 2011 Circe and 2011 Comus at the U.S. National Wine Competition, and a Best of Class and Gold in the Red Bordeaux blend category for their 2011 Comus at the 2013 International Eastern Wine Competition.
Visit Sugarloaf Mountain Vineyard on Facebook and at www.smvwinery.com