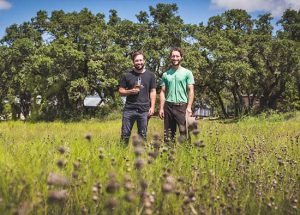 by Laura Rodley
If you got a whiff of lemon beebalm or summer hayfields while drinking beer at the tasting room at Jester King Brewery, your senses would be accurate. The sensory experience is what drives Jeffrey Stuffings, co-founder of Jester King Brewery. His brother, fellow co-founder, Michael Steffing, lives onsite.
“We take flora — lemon beebalm — and actually make a yeast starter from the microflora that exists around here — on the skin of the flora — to inoculate the wort,” said Stuffings, who always aimed toward making farmhouse ale that smells and tastes good. They work with, “hundreds and maybe thousands of microorganisms,” found in their fields.
They gather lemon beebalm and horehound from the 60 acres the brewery sits on, nestled, “on the doorstep of the Texas Hill country,” situated on the outskirts of the center of Austin, Texas. “The heart of what we do is tied to a time and place, making farmhouse ales that are part and parcel of the land and air around our brewery and unique.”
Stuffings started out as a home brewer, and followed his desire to open a brewery opening Jester King Brewery in 2010. According to Jeffery at that time they were, “unofficially the 12th brewery to open in Texas. The brewery market has really mushroomed, with now over 200 breweries. I felt, at the time, that there was an opportunity for growth.”
They are known for their spontaneous (SPON) fermentation beers. He harvests bacteria from his fields to use it to ferment the ale, according to the true farmhouse tradition, then incorporating well water, local grains and microflora. “Our yeast and bacteria capture is very simple: by allowing the wort to cool overnight, airborne yeast and bacteria falls into the wort.”
It’s a crossover with wine, where microbes already on the grapes create the fermentation ingredients. “Wine making, like beer making, goes back millennia, before the advent of scientists using a pure strain of yeasts, instead using naturally occurring ambient microbes.”
His friend, winemaker Lewis Dickson, owner of Le Cruz de Comal in Canyon Lake, refers to the process as an umbilical cord between his wine and his field. “I have very much the same feeling, feel more kinship with natural winemakers, and their technique,” said Stuffings.
“Our process is highly sensory driven. We don’t have a laboratory, so variables are based on climate conditions, how the mixture choses to behave; all these variables combined together batch to batch — it’s everchanging — it’s impossible to make the same beer twice.”
In July, “we did a riff on the Eastern European beverage called Kvass,” said Stuffings. They added 140 pounds of Miche Bread baked by Austin’s Sandeep Gyawalj into the mash, liquefying the bread to enhance its inherent sugars, with a mixed culture of brewers’ yeast, native yeast and bacteria and soaked the grains, which were malted barley and rye.
Post-Thanksgiving, they opened the Kvass for customers in their tasting room to taste, with approximately 3,000 bottles available.
In January, former Head Brewer Garrett Crowell, credited with creating Jester King’s mixed culture, left to start his own brewery. Averie Swanson took over as Head Brewer. “She’s been here for about four years, done a fabulous job for us — management, leadership, representation — we couldn’t be happier to have her as our head brewer.”
Some of the largest craft breweries in Texas make 75,000 barrels, Stuffings notes, but Jester King chooses to stay small to make varied ales.
Jester King Brewery makes 3,000 barrels of beer a year. “We sell most of that beer on site in our tasting room,” said Stuffings.
At Jester King Brewery, each batch is a surprise. “Made using basic scientific measures of mixed culture fermentation, we pretend this beer doesn’t exist, put it away — let it reach a sensory level that we’re happy with.”
In December, they released three limited edition SPONs: one flavored with Texas peaches and California apricots, one with raspberries and cherries, and the last, SPON Flor, where sherry flor migrated from adjacent barrels near where it was fermented.
This spring they will release a mixed culture beer made with fireweed gathered on their fields, while their friend, Andrew Pogue, visited. Pogue is starting Fair Isle Brewing in Seattle, WA ,with his business partner Geoffrey Barker. Jester King has partnered with them as they start their brewery.
Stuffings said, “The craft beer community is, in general, very friendly and collaborative. I feel a kinship with them regardless of where they are in the world.”