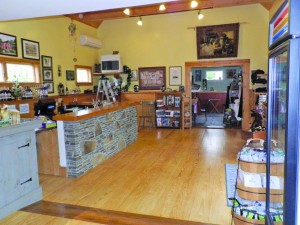 by George Looby
What started out as a consulting engineer’s fascination with fermentation has grown in 10 years into a successful winery tucked away in the rolling hills of northeastern Connecticut. In his career, Dick Auger has done many things many of a highly technical nature. At one time he was acting in an advisory role during the construction of a facility in Rhode Island which was to be devoted to the production of antibiotics. During noon lunch breaks he had the opportunity to become acquainted with many of the production staff, some of who were Ph.D. biochemists and bacteriologists on site to ensure their laboratory space was on target and would meet their own very particular needs.
As one might imagine, the conversations at these sessions were often of a highly technical, covering a wide range of topics — one of which involved fermentation. For reasons known only to himself this topic ignited a high level of interest in Dick’s mind and according to Linda, his wife of 39 years, he became immersed in the subject. He gleaned as much information as he could from that knowledgeable group. With an increasing base of knowledge regarding fermentation, the question then became what to do with this newfound information.
Linda reports that novels, history, biographies and such have never been Dick’s strongest reading interests. But throw him a highly technical manual and he will devour and absorb it immediately. The Christmas after his initial exposure to fermentation, he asked for a book on winemaking as his Christmas present. A new career was about to be launched. Dick’s next request was for a winemaking kit. The Augers were off and running. That spring they planted three grape vines in their backyard in Woodstock, CT, carefully nurturing them until maturity, when the initial crop was harvested and processed into their first wine. All of this was achieved by reading and following the instructions in the book.
A guitar teacher in a neighboring town was considered something of a wine aficionado. When he sampled one of the early runs, he deemed it, “not bad.” With that ringing endorsement, the Augers thought they might be onto something worth pursuing.
The house lot on which they planted those first three vines was of modest size, and would in no way support the sort of operation they envisioned. They knew they needed to take a giant step, so they put their home on the market and begin the search for parcel better suited to their anticipated needs. They contacted a local real estate agent, who was given the assignment of finding a potential vineyard — an assignment that realtors in northeastern Connecticut are not given on an everyday basis. Woodstock is a town with a rather broad agricultural base so in due time a suitable 4-acre site was found at which point the town’s agricultural diversity was about to become even more diverse.
The new farm, conveniently located on a well-traveled state highway, fit nicely into the business plan, which included an on-site retail outlet. The acreage purchased had been part of the Taylor Dairy Farm, which had discontinued operation many years before. The Augers chose to retain the Taylor name for their new operation — thus Taylor Brooke Winery. In 1999 the vineyard was planted with the assistance of a troop of local boy scouts whose Scoutmaster happened to be Dick Auger. Post holes were dug and the first 300 vines were planted. The Augers waited patiently for three years for those first vines to reach maturity. In 2003, they applied to the Bureau of ATF for a license to begin wine production. Following this approval, they applied for and were granted state permission to sell their product on site.
One of the provisions of the state regulations regarding the sale of spirits is the Dram Shop Act. This ancient regulation dates back to medieval England when spirits, especially gin, was sold by a unit of measurement called a dram. The essence of the act holds the proprietor of a saloon is responsible for the actions of an intoxicated person. In their small operation, time must be taken to ensure that every employee is well-versed in all of the ramifications of this act to protect their investment from the irresponsible acts of others.
Taylor Brooke started the production of their wines in the basement of their new home and quickly outgrew that base of operations. Today a new building, which will be a multi-use facility for production, storage and office space, is nearing completion.
In keeping with their progressive and forward-looking management style, the Augers applied for and received a matching grant under the provisions of the Farmland Restoration Act from the Connecticut Department of Agriculture for the restoration of an adjoining 12.8-acre parcel. The goal of this innovative act is to restore abandoned farmland to productive status. In June of this year, 5,000 vines were planted on this reclaimed land.
Both daughter Victoria and son Nicky have expressed interest in jointly assuming ownership if and when their parents decide to retire. Victoria has experience in vineyard management in California and was married in the early fall to an executive chef. Together, they produced a wine that was served as part of their wedding feast. One can only speculate as to what innovative wines they might be able to bring to the market.