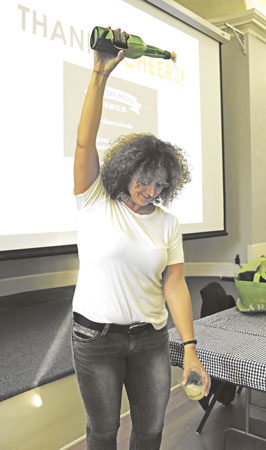 Three days of tasting events and visits to apple orchards and all things apple were the highlights of the 24th Annual CiderDays, held throughout Franklin County, MA, on the first weekend in November. Over 200 people, many amateur cider makers, were packed into the Shelburne-Buckland Community Center to listen to a panel of cider experts during “Cider 201: Hot Tips from Veteran Cidermakers” on Saturday, Nov. 3.

Don Kruger is one of the dozen members of the CiderDays planning committee. He works with social media, building the CiderDays’ website, www.ciderdays.org, and handling publicity.

“All of our cideries and orchards are open,” said Kruger, with over 50 different events offered at over 14 venues.

Jerry Maloney and his wife started making hard cider commercially in 1984, becoming the first U.S. winery to specialize in hard cider, when they started West County Cider in Colrain, MA.

“They found other people making cider,” said Kruger, and the resurgence grew. “Basically, the American resurgence of hard cider we started here.”

Representatives from their group approached the Franklin County Chamber of Commerce, who agreed that producing hard cider as a product would help the local orchards and give them something new to sell to increase business and took them under their promotional wing.

“Some of us have been here since the beginning, almost a quarter of a century of doing this,” said Kruger. They are already revving up for next year’s 25th anniversary.

Events such as “In Reverie” with Chef Johnny Spero at Hawks and Reed in Greenfield, MA, “Cider and Cheese Pairing” with Provisions of Northampton, MA, plus award-winning Ciders (“Taste the Victors”), as well as “A Taste of Asturias from the Orchard to the Sea with Begona Medio and Friends from Northern Spain,” held at the Deerfield Community Center in Deerfield, were already sold out when the program was printed.

The many free educational events included “Apple Alchemy: Secrets of Making Award-Winning Hard Ciders” with William Grote of New Salem Preserves and Orchards, “Sex(ism) in the Cidery: A Panel with Trailblazing Women of the Cidery World,” “Learning to Graft” with Colin Scott from E&J Scott Orchard in Buckland, MA, “A History of Apples in America” with John Bunker, plus “Scaling Up Cidermaking from Home to Nano Commercial” with owner of Bear Swamp Orchards and Cidery Steve Gougeon of Ashfield, MA, orchard rides at Pine Hill Orchards in Colrain, MA, and more.

One audience question during the “Cider 201” talk regarded producing sour cider rather than sweet, and how could they avoid doing that again. In turn, panel member Steve Patt asked the questioner if he had previously made sauerkraut, because residuals could linger in the air and get into their cider. This wasn’t the case. 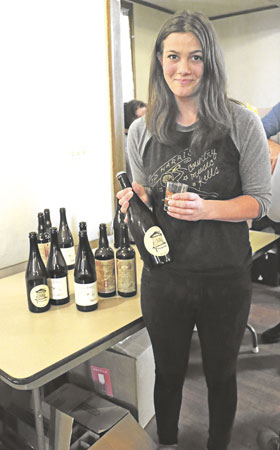 The type of apple used could cause sourness. Patt said he uses some kind of additive to maintain sweetness. “I use Splenda but the sweetness level stays there – one-third cup of Splenda to five gallons.”

Another factor affecting cider results was whether the person making it was using city water or spring water or well water.

Yet another panelist suggested keeping it simple, and if the cider produced was sour to simply pour off some of the cider and add some sweet cider – a sweet solution.

Outside, braving blustery rain and wind underneath their tent, were Sue and Lou Chadwick of Second Chance Farm from Bernardston Road in Greenfield, MA, selling apple trees, apple pies and offering samples of their hard cider. They raise more than 100 apple trees plus a nursery stock of another 100 apple trees on nine acres. They have been growing trees for 40 years. As some of their trees have up to three varieties growing on one tree, they don’t allow public apple picking.

They have been involved with CiderDays since its conception, “when it was up in Colrain and it got snowed out in the wintertime,” said Lou Chadwick.

“Usually we have 100 different kinds of apples laid out on our table, but this was a hard year for apples,” he said. On the flipside of products under Mother Nature’s control, last year was a superior year for Franklin County’s apples.

This year, they will be making their hard cider out of the juice of Northern Spy, Baldwin, Arkansas Black, Empire Apples and Granny Smiths. “Normally we add sugar, because it gives it a little more alcohol content and makes it sweeter,” said Sue Chadwick.

Considering Mother Nature’s unpredictable whims, one has to maintain a level of chutzpah and confidence to remain growing and selling apples for four decades, which the Chadwicks embody. Offering a glass of their hard cider, Sue Chadwick said, “Try some of ours. It’s better than you’ll find inside.”