The appeal of moonshine and TazaRay 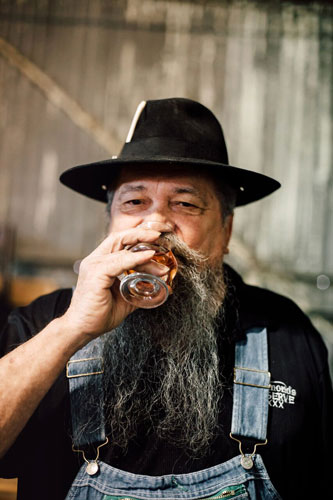 by Laura Rodley
Dalton Distillery is only four years old, but they’ve already taken hold in Dalton, GA, known as the carpet capital of the world, with their Raymond’s Reserve and their gluten free TazaRay, the only sunflower-based spirit in the world.
Raymond Butler Jr., known as Chuck, was working as a full-time police chief in Fairmont when he decided to take another risk. “I was spending a lot of time away from my family. I had enough money to invest in a business that would allow me to spend more quality time with my family.”
He chose to make whiskey based on his father’s family recipes passed down through the generations. “I wanted a good family business so my son could spend time with my dad and learn things from him that I didn’t get time to learn from my grandfather.”
His father, Master Distiller Raymond Butler Sr., is known as Ray. His son’s name is Raymond Butler III, and is called Trey.
Now retired from the force, Chuck, 43, started the business in 2013 and started production, along with Ray, in 2015. They work in a 5,000 square foot distillery and produce two barrels a week.
As a boy, Ray had been initiated into distilling moonshine whiskey with his own grandfather in the woods of Georgia’s Appalachian foothills. At the time, moonshining was a way to make money to feed families when money was scarce. They make their own 111-proof moonshine called Raymond’s Reserve out of corn, sunflowers and malted wheat.
“Some of what is sold as moonshine has a moonshine-flavored extract added to it that brings the proof down – nothing like the way old timers made it,” said Chuck.
Another piece of advice passed down the generations was how to tell a good whiskey: “Good whiskey is so clear you can read a newspaper through it.”
Their first bourbon was a one-time limited edition of 102 bottles made in 2017 upon special request from the city of Dalton to commemorate the 102nd anniversary of South Dixie Highway, one of the first major highways built in the county. “It was primarily a corn bourbon with a small portion of sunflowers, bottled at 102 proof.” Each family was allowed to purchase only two bottles.
All their products contain a small portion of sunflower seeds. Because they are a small business with limited help, they source out their sunflower seeds, buying them from a business that has been verified non-GMO by the Non-GMO Project.
They started using sunflower seeds as an alternative to using wheat malt after the wife of the president of the Chamber of Commerce president asked if their whiskey was gluten free. Most whiskey is made with barley, rye and wheat to complement the corn, Chuck noted.
They developed TazaRay, which has no wheat. It contains primarily sunflowers seeds and corn. The sunflower seeds are malted and corn is malted with it to get enough starch. “We get a 5 percent yield out of the sunflower mash. We add corn to help us get a little more yield. It’s still an extremely low yield,” at 90 proof. “It’s a higher price than other craft whiskey or spirits,” said Chuck. Their original TazaRay has a sunflower, honeyed vanilla and smoky tang. TazaRay RED, aged in red wine barrels that have only been used by one previous vendor to avoid contaminates, has the lingering taste of licorice, honeysuckle and blackberry.
At 90 proof, Chuck is concerned about the lower yield, but people have been spreading its praises. “It’s called a spirit because the federal government doesn’t consider sunflower seeds a grain, and whiskey is made with grain, so it can’t be called a whiskey; whiskey is 51 percent grain-based. Since we’re well over 70 percent sunflower seeds, it’s called a spirit.”
As the sunflower is the native crop of America, he noted, it appeals to people’s Native American roots. “My dad is 75 years old. His grandmother was a full-blooded Cherokee. Taza means warrior in Cherokee and Ray means ray of sunlight, or Ray, short for my dad’s name. We are building it as a high quality premium product. My dad was a drafted Vietnam vet. We are taking it into VFWs and other places that are taking our spirits. He helps us promote it by going out to patriotic bars.”
Currently, Empire Distributors distributes their product throughout Georgia and Tennessee. They are considering branching out into Colorado within a few months.
They are also enticing chefs by getting them interested in cooking with TazaRay due to its being a sunflower seed-based spirit, and packed with flavor. “It’s really great to cook with, to make sunflower chicken wings.” The upscale Barnsley Resort, half an hour away in Adairsville, GA, buys their TazaRay to cook their quail, pheasant and chicken.
Their products are requested at patriotic events like Memorial Day and the Fourth of July. They can also host special functions for up to 100 at their distillery.
“What is really nice to see is that whenever we go into restaurants and bars, people treat my dad like a rock star. They want their picture taken with him,” Chuck said. “My dad is 75, traveling around, enjoying the interaction of customers” and the allure of being a superior moonshiner, now all out in the open.