The essence of Mississippi 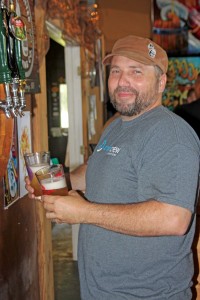 by Sally Colby
They’ve become known in their state as the weird brewery and that’s fine with owners Paul and Wanda Blackshire. Paul says that while some breweries successfully market themselves as uniquely southern, Crooked Letter Brewing Company, in Ocean Springs, MS is taking a somewhat different approach.
“We spent time in touring bands for more than a decade,” said Paul, who was born and raised in Biloxi. “Being southern is cool, but we wanted to take on a global marketing scheme.”
Like other craft brewers, Paul and Wanda wanted a unique and memorable name for their business. Paul explains that the name originates from a simple mnemonic that Mississippi children use to learn to spell the name of their home state. “M, I, crooked letter, crooked letter, I, crooked letter, crooked letter, I, humpback, humpback I,” he said. “One of the bands we traveled in was called Krookid Ledder Youth, and we had such success with that name that we decided to recycle it. Crooked Letter ties us in with Mississippi just enough with people who are from Mississippi.”
After a start in home brewing, their philosophy was to open a brewery that encompassed the entire process. “We call it grain to glass when we talk about beer education, how we take raw ingredients and put them into a glass,” said Paul. “So it isn’t just about the grain purchased from a supplier, but the grain from growing and malting to brewing and serving.” Paul and Wanda’s original concept included doing just that and although they are unable to carry out that idea in their current location, they haven’t given up on the idea.
Paul creates beer recipes and Wanda manages marketing and concepts, including marketing, promotion and social media. Paul manages the business and also develops recipes. But they often venture beyond their appointed roles and both are accomplished brewers.
“I develop recipes and brew small batches, then a brewer does the production batches based on recipe formulation,” said Paul, adding that one of Crooked Letter’s best beers is Mystery Romp, one of Wanda’s recipes. “We have an employee for cellar work and one for packaging.”
Paul says that the brewery is doing well despite their relatively small size and the short time, barely three years, they’ve been in business. Crooked Letter is currently about 10,000 gallons/month. “We’re presold for at least the next five years in five states but we’re only in two states right now,” said Paul. “We’ve been contacted by distributors and retailers who are waiting on product.”
Crooked Letter beer has garnered praise both in Mississippi and nationally. “People talk about our beer a lot when they’re on a brewery tour or at events, and the conversation is always about who came up with the art or the name,” said Paul. “People are fascinated with our marketing, but we just wanted to be able to catch someone’s eye when they’re looking at 500 beers on a shelf. We really didn’t think that the artwork would have a cult following outside the beer scene.”
Label concepts begin with Wanda’s stick figure sketches. The sketches, along with notes about what they envision for the label and a description of the beer, go to artist Michael Pukac, who pulls the concepts together. “We aren’t graphic artists,” said Paul, “so we tend to let him to what he wants to do.” Although Crooked Letter beers currently have paper labels, they hope to use etched bottles in the future.
The label for Crooked Heffy, a German style hefeweizen, is 100 percent Pukac’s concept. Pukac returned a draft of what he conceptualized and it turned out to be just what Paul and Wanda imagined. Gipsy IPA is the only label not done by Pukac, the art was done by James Taylor, who lives in Northeast England.
Every year, Crooked Letter Brewing Company works with the Gulf Coast Brewers League to sponsor a brew contest. “They put the contest together, and we brew the winner’s beer in our system,” said Wanda. “The last winner was from Chesterfield Maryland.” This will be the third year for the homebrew contest.
Paul says that they’ve received positive feedback from participating home brewers. “It’s a national competition with six beer cicerones to judge approximately 200 entries,” he said. “The wining brewer’s name goes on a bottle, so they’re happy about that.”
The most popular event of the year is the annual haunted brewery tour, the only one in the state. “We turn our brew house and cellar into a haunted house,” said Wanda, adding that it takes weeks to prepare for it. “We have volunteers come to work it, and at the end, we have special beers to sample. It’s family-friendly and all ages are welcome.”
Crooked Letter beers are becoming widely known thanks to distributors who are doing a good job getting beers into stores, bars and restaurants. “We can market ourselves and create relationships on the retail side,” said Paul. “But in Mississippi, we can’t sell beer directly – it has to go through a distributor. That’s a good thing because they have the resources. We work with five distributors in the state of Mississippi, and just launched in Louisiana.”