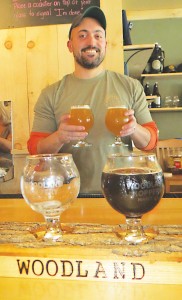 by Troy Bishopp
MARCY, NY – Many folks in the Central New York area remember heading north to peruse the unfinished furniture at the former Marty’s Jungle on Trenton Road in Marcy. That historic address is now occupied by the new Woodland Hop Farm and Fermentation Brewery; touting distinct, drinkable finishes of hops, herbaceous overtones and smoky goodness. The first Oneida County farm brewery is born.
The trinity of friends, A.J. Spado, Keith Redhead and Nick Natishak who are schoolteachers and avid home brew aficionados, poured out their passion at a packed grand opening on Jan. 9. “We make beer that we like to drink and hope everyone else will like it too”, said Spado.
The New York State Farm Brewery Law allows tasting rooms and samples, as well as sales by the glass and retail sales. To qualify, at least 20 percent of a brewery’s hops and other ingredients must be grown in New York. That percentage will increase periodically up to 90 percent starting in 2024. This has stimulated interest in building a local, burgeoning, small-scale craft brewing industry, just as farm wineries took off in other parts of the state after the 1976 Farm Winery Law.
The “hop-sters” behind Woodland Hop Farm and Fermentation see their establishment as a place where customers can relax and sample varieties of beer, tour the brewery and take home a growler with a unique blend of flavors. They’ve installed brewing equipment that can brew 5 barrels at a time, but will “double batch” each brew in 10-barrel fermenters. (A barrel is 31 gallons). They will also specialize in barrel-aged beers and beers served in “real ale” casks or firkins (naturally carbonated with no added gas).
“We’ll be making all styles of beer, from extra hoppy IPAs to malty stouts and everything in between. Our goal right out of the gate (or tap) is to produce a new brew combination each week as we experiment with different ingredient subtleties. Our taps won’t be boring”, said Spado.
For now the three partners will be keep their teaching jobs and moonlight as brew masters. They are looking into establishing an off-site hop yard and partnering with other farmers to grow their ingredients in the near future and remain committed to a local business climate. If their brisk opening was any indication of interest, it looks like the gateway to the Adirondacks will be adorned by lupulin goodness!
“Ideally, brewers interpret history, and through science they create art.” ~ Don Spencer, Silver City Brewery.
Visit the Woodland Hop Farm and Fermentation at www.woodlandbeer.com