The necessity of a good trademark 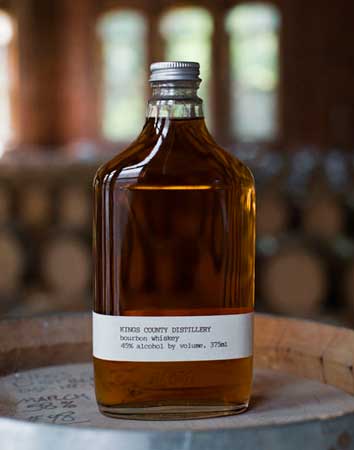 by Emily Enger
Prohibition in the United States officially ended in 1933. New York City’s first distillery since that era didn’t open until 2010. To be such trailblazers is something King’s County Distillery claims with great pride — which is why they named their company after their location, the second-most populated county in the U.S. Their packaging is basic and minimalistic, intended to resemble the old whiskey bottles of Prohibition.
Minimalism is all the design rage these days, but Nicole Austin, master blender for the distillery, admits that in hindsight, such simplicity was a mistake. “At the beginning, we weren’t really thinking, ‘How do you protect this brand from being ripped off?’”
After only three short years in business, a competitor created similar packaging to King’s County Distillery’s — which isn’t surprising, considering how strongly the entire alcohol industry is linked to the Prohibition era.
“It was very deliberate of this person,” said Austin. “The bottles were so similar that when we sent side by side copies to our attorney, he said, ‘Great, can you send me a photo of the other one?’”
King’s County Distillery did not have a national registered trademark. They saw themselves as too small to matter — they’d never be large enough to make the big alcohol companies feel threatened and there is always a code of honor among the ‘little guys.’
“We had this naive assumption that anyone else running a small brand would have too much honor to do this,” admitted Austin. “In hindsight, it was very naive of us.”
Their attorney, Daniel Marotta, has been practicing trademark law for 20 years. The increase in minimalism has created some notable problems — in all industries, not just the craft beverage scene. He’s witnessed other cases where a simple brand resulted in companies getting copied. “I do think it’s a problem,” admitted Marotta. “The best protection against trademark violations is to try pick a name and brand that is distinctive.”
In the end, King’s County’s lack of a trademark meant letting the competitor get away with ripping them off. They could have tried to fight it, but their lack of registration made for a more complicated court process. As Austin explained, “More money means more power, so even if we were completely in the right, it didn’t matter because we probably wouldn’t have been able to outdo our competitor’s resources.”
If they could start over, Austin says they’d probably do more than just register for a trademark. “We might try to design our branding in a way that had something about it that was uniquely us,” she said, as opposed to referencing an entire era. They’d also apply for trade dress.
A trade dress is an alternative legal protection offered by the federal government. Where a trademark is a protection of brand names, trade dress protects the packaging or design — the ‘dressing’ of the product, if you will. This would have been specific protection for King’s County Distillery’s bottles.
About trademarks
The simple definition of trademark, according to Marotta, is “a brand identifier.” When customers see the trademark, they recognize the company. Trademark laws were actually designed to protect consumers, not businesses. The idea was, if customers shell out for a product, they should have a guarantee that their money went towards the real deal, not a cheap imitation.
But in today’s world, getting a registered trademark is becoming necessary from a business standpoint, too, as companies try to mimic others in order to undercut competitors’ profit and customer base. “Just go into any store aisle and note how each product’s packaging looks the same,” explained Marotta. “They’re all trying to cheat each other.”
In the case of King’s County, Marotta feels they did a lot of things right. “Their brand wasn’t minimalist for art’s sake — it tried to evoke a particular era. It wasn’t just a white bottle with a black dot.” Their lack of a federal trademark registration is not surprising to him. “A lot of new craft brands don’t have a trademark for their name, let alone their bottle.”
How to create a good brand 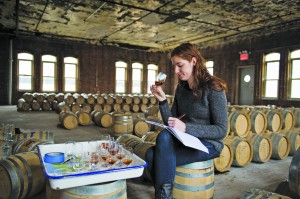 To get registered, no one in your industry or a similar trade can be using the name you want. Because you are up against your own industry, names that describe what you do or include the products you use are rarely accepted — typically they’re already taken. It’s a similar concept to creating an e-mail address or website domain. Even if you use personal information — such as your own name — somehow there are always three other people with your name who already have versions of what you want.
“It’s quite amazing how often you find that someone else already has a similar name,” admitted Marotta. After a couple decades in this business, he still finds himself surprised while vetting names for clients.
The best protected brands, according to Marotta, are termed ‘fanciful’ names. Basically, the company just made up the word. Pharmaceutical companies do this all the time — hence the long string of random letters that make it impossible to pronounce names of medication. But since most companies don’t want a jumble of x, y and z’s in their name, the next best option is to go with arbitrary names: words that have nothing to do with your industry.
“The best example of an arbitrary name is Apple computers,” said Marotta.
The genius of the Apple brand is that the fruit has no pun or etymology that links to the tech industry. It’s a great brand for computers, but it wouldn’t be a good choice for, say, a farmers market.
Marotta’s advice to those starting a business is pretty straightforward. “Step one is to choose a name and branding strategy that conveys the message you want to convey,” he said. “Find a name no one else has that is somehow consistent with your message. Spend a significant amount of time thinking it through. Then hire a trademark attorney to vet it out for you before you spend money on marketing.”
He also recommends seeking consultants to educate you on local liquor laws and whatever technical production advice you need up front.
Austin concurs. “Don’t forget to think about trademarks from day one. Spend the time and money to contact an attorney to make sure you are safe down the road.”