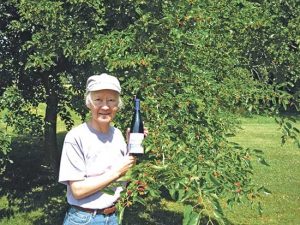 by Deborah Jeanne Sergeant
Fumie Thorpe breaks most stereotypes for Finger Lakes wine country growers: female, Asian, single and educated in meteorology and astronomy. She seems an atypical owner and operator for Thorpe Vineyard in Wolcott, NY but her 3.5 acres produce about 500 to 700 cases of wine annually from her vinifera and French hybrids.
Regardless of her background, the same factors for making a vineyard successful for other vintners applies to Thorpe. She uses social media and emails to market the business. Though not intended as a marketing tool, her “Starry Starry Night” events at the winery also attract attention, though she said she hosts the events because she still enjoys meteorology and astronomy from her days at SUNY Oswego where she earned her degree.
“I like doing this and sharing my interest with people,” she said of stargazing. “They may not be wine people. I want to raise awareness about what surrounds us and that’s my interest.”
Overlooking Lake Ontario and neighboring Chimney Bluffs State Park, the setting could scarcely be more picturesque. When Thorpe and her husband purchased the property more than 30 years ago, she knew nothing of grape growing or winemaking. When they parted ways, she stayed at the winery and became interested in becoming a grower and she learned the craft from the property’s previous owner, Bob Straubing, as well as Kemp Bloomer, both amateur winemakers. She also took classes from Cornell University.
Thorpe’s wines include dry vinifera varieties, sweeter blends, semi-dry Riesling and a red called Maréchal Foch. She offers a tasting room to help shoppers decide and also sells bottles at area liquor stores. Recent changes in liquor laws now allow her to sell wine by the glass with only a farm winery license so visitors can partake of a larger sample of her wines.
Positive changes like that are encouraging in the midst of a difficult season. The region has been pounded by rain and plagued by cold weather all summer.
“I’m not too pleased,” Thorpe said. “It’s been hard. I’m sure it’s the same for everybody. The excessive rain raises the chances of fungal disease. I’m trying to keep it under control as much as I can.”
She anticipates that the crop will decrease a little.
Next year is the winery’s 30th anniversary. She has produced commemorative wines in the past for milestone anniversaries so she hopes to try something for the vineyard’s big 3-0 as well.
She advises other women interested in farming to not feel intimidated.
“I said years ago that people in Wayne County will have to get used to me,” Thorpe said. “I have color and an accent and being a female in a place like this makes it a little different.
“Wayne County farmers are mostly white men. They’re the ones that don’t know what to do with me,” she added with a chuckle.
It’s that kind of pluck and perseverant spirit that has helped her overcome quandaries over growing issues or equipment problems.