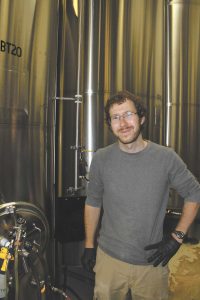 by Karl H. Kazaks
CHARLOTTESVILLE, VA – In colonial times, Three Notch’d Road was a major east-west thoroughfare that cut across what is today central Virginia. Sometimes called Three Chop’t Road, the route was likely named after the blaze pattern used to mark the trail – three notches cut into adjoining trees. Today US 250 and I-64 pass through the corridor established by Three Notch’d Road.
It was down Three Notch’d Road that Jack Jouett made a famous horseback nighttime ride during the Revolutionary War. Following a British attack on Richmond, Governor Thomas Jefferson and members of Virginia’s legislature removed to Charlottesville. The British then hatched and put into motion a quick-strike surprise attack on the notables. Catching wind of the plans, Jouett set off to warn the sleeping leaders. He arrived before the British, warning the men and allowing most of them to escape.
Today, Three Notch’d Brewing recognizes Jouett’s heroism in naming their flagship IPA 40 Mile, after the distance travelled by Jouett in his full-moon ride.
The brewing company acknowledges other important parts of Virginia history in the names it has chosen for its beers. For example, No Veto Brown – which won Gold Medal in the English Mild and Brown Ale category at the 2015 Virginia Craft Brewers Cup – is named after Patrick Henry’s successful effort to overturn the King’s practice of vetoing colonial laws.
The decision to remember such important moments in history accords with the brewery’s primary vision of “leave a mark.”
According to Scott Roth, one of the brewery’s founders and its president, the brewery was founded on the belief that “whatever you do, do it in a way that’s meaningful to your family and community.”
Being involved with family and community is an important part of Three Notch’d’s culture. Family members of the brewery’s founders founded and operate their own distributing company – Central Virginia Distributing – which represents Three Notch’d beers as well as the output of one local cidery.
“The goal of self-distributing,” Roth said, “is to have a really high level of customer service.” The distribution company will focus on Central Virginia; as the brewery grows, it will look to use another distributor for the Norfolk and Northern Virginia markets.
What’s more, this year Three Notch’d is opening its RVA Collab House in Richmond, whose “whole premise,” Roth said, “is to collaborate.”
The Collab House will have a three and a half barrel system and is designed to create special and on-off brews for restaurants, home brewers, sports teams, musical groups or artists, businesses and non-profits.
“The options are endless,” Roth said. “Our brewers are so creative.”
At present Three Notch’d creations are carried at roughly 700 retail outlets, including Kroger, Food Lion, Harris Teeter and Sheetz. They are also poured at the brewery’s home taproom in Charlottesville and at a satellite taproom (which has a smaller brewery system) in Harrisonburg.
The brewery opened for operation in August of 2013, after some planning and prep work by the founders Roth, Derek Naughton and George Kastendike. In the three years since opening, the brewery has made roughly 30 different package beers and 70 draft beers, giving Founding Brewer, Dave Warwick, plenty of opportunity to exercise his creativity.
The barrel program has included beer such as Man’s Best Friend, a coffee stout aged in old Breckenridge Bourbon barrels. Biggie S’mores is an Imperial Stout made with graham crackers and aged in bourbon barrels. They’ve also made some session beers and a rye IPA.
With more than 100 different beers so far, in less than three years they are making a mark on many grateful beer drinkers across Virginia.