To buy or not to buy 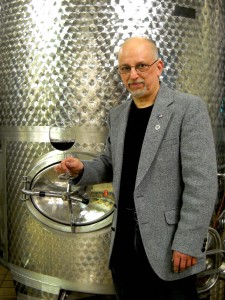 by Kelly Gates
Since the market crash of 2008, many wine operations, particularly smaller boutique wineries and startups, have had to make major adjustments in order to avoid equipment deficiencies and thus, overall inefficiencies and profit loss.
According to Richard Vine, partner at Vintage Winery Consultants and professor of enology emeritus at Purdue University, one of the most impactful results of the economic meltdown on the wine industry is decreased lending opportunities.
“Whether it’s upgrading equipment, expanding facilities or opening new markets, most of the management decisions winemakers make during down times are heavily influenced by capital positioning,” said Vine.
Wayne Stitzer of Connecticut-based Wayne Stitzer Consulting, concurred. Wineries have struggled to receive funding in the past few years because of the crash, causing manufacturers and middlemen to recoil as well. In short, it has affected the entire industry, he said.
“By 2009, the whole economic situation in regard to borrowing money changed and the smaller wineries, which are the most dependent on loans, were instantly in a world of hurt,” Stitzer said. “Suppliers downsized inventories significantly — some entirely — as a result, leaving winemakers out of luck if they need something immediately. Wineries can always find some sort of pump or secondary parts, but when one needs more tank space and tanks are not available anywhere, that’s a big problem.”
Some manufacturers, importers and distributors limited their inventories to only a select few products, eliminating both high- and low-end options in lieu of mid-grade components that offer the most versatility. Others sold out of their existing stock and have since only sold pre-ordered equipment.
“The smaller wineries that would have normally opted for smaller, less expensive replacement parts and additional equipment have been forced to pay more for a higher grade product or do without,” noted Stitzer. “In many instances, even if they are willing to pay for it, they can’t get their hands on what they need, certainly not when they need it. Stainless steel tanks are the prime example of this.”
Poly tanks — flex tanks in particular — have been popular go-to replacements for the preferred Italian- and Slovenian-made stainless steel tanks. It’s not surprising considering the lower costs of the plastic equipment.
Or the fact that it presently takes several months to ship tanks and other European-made items to the U.S. when in stock — and upwards of a year when they have not even been made yet.
“I’ve had clients order equipment from overseas in November or December and we were uncertain if the shipments will arrive by August of the following year,” said Stitzer. “People are using poly tanks because they not only the cost much less than stainless, they are also readily available on both coasts and everywhere between.”
As long as a container is neutral — if it will not leech or otherwise alter into the liquid it contains — and if it is kept full and properly sealed, there are some poignant benefits to swapping out steel for such receptacles.
“Flex tanks can be picked up and moved using a pallet jack and stacked two or three high,” he explained. “A poly maturation tank may not be the first choice, but for someone in need of fermentation space, they are a viable option. The microoxidation effect is similar to that of an oak barrel and winemakers can still achieve a similar oak effect by using granular chips.”
A handful of wine producers have turned to transportation tanks for fermenting emergengies.
Some have tried fermenting in 55-gallon juice barrels. And many downsized or stopped their imported grape orders altogether due to an overabundance of their own harvest and lack of processing equipment to handle it all.
Stitzer warns against falling for “recession sales.” Many of these, he said, are simply the same equipment components that were traditionally sold a la carte, now packaged together for the same price or only slightly less money overall.
He suggests several strategic changes to small wineries’ future business plans.
“I’m starting to see lending open up, but banks are still very nitpicky about who they loan money to. So I have been working with winery owners to develop much deeper business plans before submitting them to lenders,” he said. “I advise them to consider several brands of equipment before settling one and encourage them to incorporate contingency funds into the loans because there will always be things they missed or could not predict, like the recent market crash.”
Vine also suggests a thorough assessment up front to avoid such issues. However, analysis can be taken at any point in a winery’s evolution, even amidst an economic downturn.
The key is to consider all aspects of a winemaking business before making any purchase decisions, he said.
“When I am called upon to consult in this regard, my first efforts are to identify the anatomy of the facility, including its location, fruit supply, product line, quality history, price positioning and sales record,” said Vine. “These are integrated into the apparent ability of management to manage additional facilities and/or markets.”
From this, a good picture generally develops of where the winery has been and more importantly, where it could or should be going. It also becomes obvious how new investments into attractive opportunities can bring at least adequate returns, he added.
“Every winery should have a solid estimate of how much its vineyards will produce during the best possible season, a number that represents maximum capacity,” said Stitzer. “There should be enough in finances to cover the amount of equipment necessary to manage at maximum capacity, plus a little more for good measure. Then, contingency funds should be in place above and beyond that.”
Being prepared for the worst of conditions will enable a winery to manage virtually anything the market can throw at it, including a recession, he added.