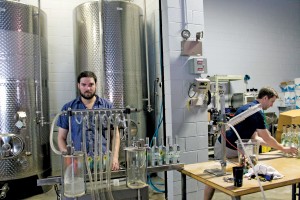 by Karl H. Kazaks
CHAPEL HILL, NC – Top of the Hill (TOPO), a brewery, distillery and restaurant near the University of North Carolina campus, is a downtown Chapel Hill fixture. Founded by Scott Maitland in the mid-1990s, it was one of North Carolina’s first microbreweries.
Maitland, a graduate of West Point, has the kind of forward-seeing, propulsive personality you’re not surprised to find in someone chosen to attend that august and selective institution.
So it was about a decade ago that Maitland decided to package some of his beer in cans, well before that kind of container became widely popular in the craft beer industry and with craft beer consumers. He bought some pre-owned processing equipment, an older line from Cask Brewing Systems with a low throughput. Maitland called a can supplier, looking to source 5,000 cans. The minimum order was 165,000 cans. Maitland realized that if he was going to be buying cans on that scale, he needed to expand production, somehow.
About the same time, a farmer from eastern North Carolina came to Maitland, looking to sell him the harvest from 75-acres of organic wheat fields. Maitland didn’t need it for his brewery, but the offer inspired him to consider opening a distillery.
He and his team had the expertise in fermentation, and were game to try distillation. Plus, a distillery could use ingredients almost entirely sourced within North Carolina, which is important to Maitland, who believes in supporting local and neighboring businesses as a way to grow the local economy. “We want to spend as many dollars in state as possible,” Maitland said.
Today, the distillery sells four spirits, all made from a base of organic wheat. For almost every product, “We’re 100-miles, grain to glass,” Maitland said.
TOPO’s line consists of Vodka, Piedmont Gin, Carolina Moonshine Whiskey and a brown spirit, Eight Oak Carolina Whiskey. This summer a fifth spirit (and second brown spirit), TOPO Straight Wheat Whiskey, will be released.
Thanks to their wheat base, the spirits all have a soft, creamy quality. “The spirits are smooth coming off the still,” said Esteban McMahan, TOPO’s Spirit Guide and Maitland’s partner. “We age them not to help them get smooth but to develop wood flavors.”
The Eight Oaky Whiskey develops its wood flavors through an accelerated aging technique, a soak using eight different types of oak chips with a variety of toasts. The process adds dimensionality and character to the whiskey without overwhelming the purity of the elevated wheat flavors.
Maitland and McMahan help set the vision for TOPO’s style, but the main work of distillation is in the hands of head distiller George Dusek and assistant distiller Keith Crissman, both of whom used to work at the brewery and restaurant.
Having a team with a background in brewing is something that sets TOPO apart. “Fermentation is just as important if not more important than distillation,” Maitland said, when it comes to determining the quality of the final product.
Maitland’s original goal in 2008 was to open the distillery, which is housed in an old newspaper building in downtown Chapel Hill. Various hurdles and delays pushed the opening day back to 2012, however.
During the wait, Maitland added an event space to the restaurant and brewery – called The Great Room – as well as another outlet, Back Bar, which is home to North Carolina’s first cask-conditioned ale program.
Along the way, Maitland decided to install a distilling system that would be appropriately sized for the production he anticipated in future years.
“One of the things I did when I conceived the idea,” Maitland said, “if we’re going to get into it, build it with infrastructure.”
TOPO’s CARL continuous column system as currently arranged can produce 5,000 cases per year. That number could go up with the addition of another fermenter. The equipment is located where the newspaper’s printing presses used to be.
Maitland likes the continuous column because it “saves all kind of energy. We’re always thinking about our environmental footprint.” For example, bottles are shipped in 100 percent recycled packaging, and the distillery limits its water usage by recycling water between the heat exchanger and cooling tanks.
Being in downtown Chapel Hill, TOPO does use city water, which is quite good, Maitland said. The distillery also has its own RO equipment.
Maitland, who is a past Chairman of Chapel Hill’s Chamber of Commerce, is dedicated to keeping the Chapel Hill’s downtown vibrant.
And he’s not sitting still. Recently, he made a trip abroad to buyers interested in organic, American spirits. And he’s getting ready to make organic rum, made with U.S. cane.
The rum, along with TOPO’s straight whiskey, will no doubt only further burnish TOPO’s reputation and please its fans.
Those consumers who don’t know TOPO’s connection to Chapel Hill and the Top of the Hill Brewery will know, from the taste and quality of the spirits, that TOPO certainly deserves being described as at the top.