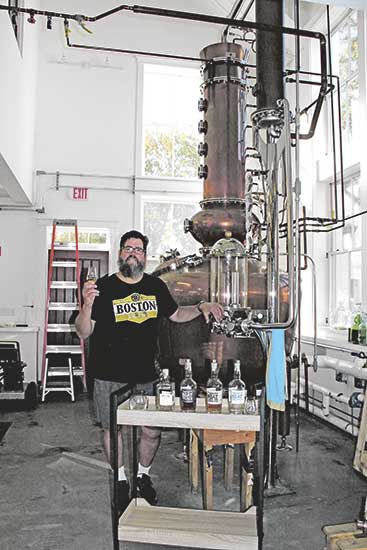 by Laura Rodley
The curling shape of Cape Cod resembles a boot without the heel, reminiscent of Italy. Because the Cape is buffered by the Atlantic Ocean and the bay on both sides, it also has temperatures similar to those in Italy’s vineyards, where vinifera or maritime grapes are grown. Because of this climate, Truro’s Vineyards in Cape Cod can also grow intensely flavorful maritime grapes, more commonly found in Europe.
The grapes had already been planted when David Roberts and his father David Roberts, mother Kathy, and sisters Kristen and Stephanie, bought the vineyard in 2007.
Roberts’ parents live near the vineyard and his sister Stephanie lives in Needham. “When the vineyard place came up for sale…we talked about buying it. It started out as a joke.” After tossing the idea around, the pieces fell into place.
“I was making beer. My father had a lot of experience as a wholesale beer distributor. It went from a joke to seeing this as serious…and [we] ended up doing it,” said Roberts. As though set in place by destiny, his father had recently retired in 2006 after 40 years of working in the fine wine and spirits industry and 20 years as United Liquors CEO.
Though their grapes on the five acres were already in place, importing maritime vines is possible through distributors based in New York.
“This is a much better climate than it is on the mainland, not nearly the harsh temperatures that they do on the mainland,” said Roberts. Therefore, they don’t encounter a lot of overwintering death.
“Most people in this climate plant hybrids because they are winter hardy,” said Roberts. They didn’t have to. The soil conditions are also a plus, as they are acidic and sandy, allowing the vines’ roots to draw in their food easily.
Their oldest vines were planted in 1992 by previous owners. The first of September, clusters of Chardonnay grapes were glistening orbs of translucent green, dusted with pink. “We’ll let them ripen for another month if we can, if it’s nice and dry.” They also grow Cabernet Franc and Merlot grapes. The red grapes stay hanging until October. All are handpicked when harvested.
When they started the business, the Roberts worked with winemaker Matyas Vogel who recently retired to his native Hungary. He has been replaced with winemaker Milan Vujnic.
They make new additions every year. “We built a barrel room for wine, a pavilion for wine tasting, expanded the parking lots, put money back in to the business to increase production [and] expanded the space for visitors,” said Roberts. Their offices and gift shop are in a circa 1800’s farmhouse.
In 2013, they purchased a 250 gallon, 25-foot-tall copper pot still and built the energy efficient barn that houses their South Hollow Spirits Distillery where they make their spirits. They have planted Juniper and Eastern Red Cedar for their gin and beach plums for their flavored rum as part of their land improvements. Their spiced rum released in May 2014. Their gin released in May 2016.
Walking into the distillery is like traveling to the Old Country, too, as the aroma of distilling alcohol and fermenters fills the air. “We do a gin run three days in a row,” he said.
They have 10 stainless steel 250 gallon fermenters and 11 storage vats. They currently have 40 full barrels of gin, rum and brandy.
Their Dry Line Gin is made of fermented cane juice, 100 percent sugar cane based. The white rum is also 100 percent cane based. Their spiced rum and amber rum are blends of molasses and cane juice.
They offer a Twenty Boat White Rum and Twenty Boat Amber. Their Twenty Boat Spiced Rum has a 115 percent proof white rum base and is molasses steeped with a cheesecloth bag of rose hip, anise, lemon peel, orange peel, vanilla bean, cardamon, cinnamon, allspice, nutmeg and chai. After steeping three weeks, it is blended and bottled. The name Twenty Boat is a nod to the small boats used in the 1930’s prohibition era rum-running.
Spirits can only be shipped within Massachusetts, but wines can be shipped out of state.
The barrels are housed upstairs in the distillery, which is warmed from the boiler servicing the still. “Fluctuations in temperature are a positive in the aging process. The high and low temperatures, to a certain extent, accelerate the aging process,” said Roberts.
Regarding running the businesses and distillery, “It’s been great — been a learning experience — learning on the fly,” he said.
The grounds are so idyllic, people book their weddings there. The business can be found by posted road signs, a huge wine barrel on a 1,200-foot tower and through social media. For more information, visit www.trurovineyardsofcapecod.com.