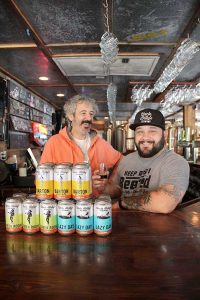 by Laura Rodley
Uncle Billy’s Brewery and Smokehouse’s taproom was closed with chairs stacked on the counter, but an air of expectation and mystery lingered. In November, Director of Brewery Operations, Jimmy Calhoun was on the opposite side of the long front room busily brewing for their many customers.
The brewery on Barton Springs Road is just one of about eight breweries within a five-mile radius inside Austin, Texas, he noted.
“We’re number one in distribution in the United States, we’re not worried about anyone else. Plus, we’ve been around longer than most of the competition,” said Calhoun. The brewery and smokehouse opened in 2006 and is owned by CEO Rick Engel, an Austin resident.
On tap behind the bar are Lazy Day Lager, Greenroom India Pale Ale, (IPA), and one named Barton Springs Pale Ale, after their road and the iconic outdoor Barton Springs where people can swim year-round. Then there’s Brew Oyster Cult — after the band Blue Oyster Cult — which has the aphrodisiac taste of oysters, and Oat of this World, an oatmeal flavored pale ale.
Their beer is sold at local stores, including Austin’s main chain of grocery stores. “They come and get it, we do not self-distribute,” said Calhoun.
There have been four brewers working at Uncle Billy’s since 2015. Trevor Nearburg is their head brewer.
Their hops are primarily purchased from Northwest suppliers but they also use some Australian hops and some northern hops from states like Michigan.
“The grain we get is pretty much from Denver and Houston. I’m not sure where it’s harvested,” said Calhoun. They have eight brite tanks and twenty-barrel tanks.
How long the beers age, “depends on what beer. The ale and porter that we do, [age] about three weeks. Lager takes about five weeks from start to finish.” They make approximately 5,000 barrels a year, and serve a foot traffic of 100 to 300 people a day in the taproom.
Brewers often get their start by homebrewing, but Calhoun stated, “when you homebrew, it’s a different animal.”
Uncle Billy’s Greenroom is a citrusy IPA, with a lemon-lime flavor, noted Calhoun. “The hops we use create that flavor,” said Calhoun. Their Lazy Day Lager is a little more malty than most lagers, and is a great summer beer.
Over in the smokehouse, “We do a brisket, pulled pork, lean and moist whole chicken, smoked turkey, chopped beef, and a rack of ribs that’s amazing,” said Jason Smith, Service Manager and Austin resident, taking time out from behind the bar to speak during a busy Sunday evening on Thanksgiving weekend.
In the smokehouse, “We do catering during the day for private events and parties,” said Smith. Then there’s the four to five whole briskets, 15 pounds each, that their incoming clientele go through in an evening. When it comes to satisfaction, Uncle Billy’s delivers.