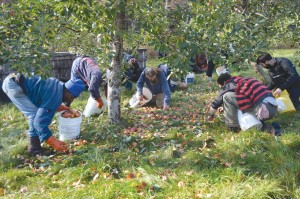 by Sally Colby
When the world market for extra-fancy, hand-picked, unwaxed fruit declined, Stephen Wood needed to find another way to keep the business he purchased from his father in the 1980s, Poverty Lane Orchards, alive and well.
Stephen started to plant some different apple varieties that would offer a unique eating experience for those who were interested in flavorful apples and planted additional acreage in cider apple varieties that would be grown exclusively for fermentable juice. Brenda Bailey Collins, who first worked at Poverty Lane Orchards in the packing house and now manages the office and the retail segment of the business, says Stephen experimented with hard cider prior to applying for a bonded winery license to make sure he could produce a product he liked.
Although Poverty Lane Orchard was a pioneer in establishing orchards specifically for cider apple production, today’s cider makers are looking for unique flavors that aren’t always available in traditional commercial apples. Some of the unusual cider apple varieties at Poverty Lane Orchards include Yarlington Mill, Kingston Black, Golden Russet, Dabinett, Foxwhelp, Harry Masters’ Jersey and Medaille d’Or.
Brenda explains that most of the fruit for cider is allowed to fully ripen on the trees to the point where it drops. When trees are gently shaken, ripe fruit falls to the ground. “That way we get the most developed flavors and profiles from each apple,” said Brenda. “Some varieties, such as Esopus Spitzenburg and Golden Russet, are suitable for both eating and cider. The crossover varieties are hand-picked, then run through the packing room and graded.” Many of these apples go into Farnum Hill’s ciders.
A
ll cider apples are pressed in the fall and go into fermentation. “Any eating apples that are left in cold storage after Thanksgiving are donated to the New Hampshire Food Bank or Willing Hands.”
Making cider involves a sensitive, trained palate and ongoing tasting. “We have a tasting crew that have worked together for years,” said Brenda. “There’s constant tasting from when it’s first pressed through every stage of the process. The crew can usually replicate to the standards – semi-dry, extra-dry – and come up with a blend that’s very close to what it was the previous year.” Brenda noted that a tasting from the initial pressing gives a hint of what the final product might taste like, but the final product is influenced by numerous variables such as temperature at fermentation time and differences in apple varieties from year to year.
The finished cider is hand-bottled in large glass bottles. “Bottles are filled and corked, then someone puts the wire hood on, then someone else puts labels on,” said Brenda. We have growler day on Thursdays from noon until 6 p.m. People can purchase a new growler and have it filled, or bring in a growler that they’ve already purchased and have it refilled.”
In the state of New Hampshire, a winery license allows licensed retailers to sell from the production site and directly to other licensed retailers. For sales to other states, Farnum Hill Ciders works with distributors. In November, Farnum Hill Ciders are represented in New York City during New York Cider Week.
Farnum Hill Ciders have developed a loyal following, and often sell out of specialty ciders such as Kingston Black, the only varietal produced at Farnum Hill Ciders. Right now, Farnum Hill is in what they refer to as a cider drought. “The cider that was fermented over winter is just reaching the point where it can be bottled,” said Brenda. “It’s maturing.” During this July and August, new bottlings will be released.
Brenda says that when people first taste hard cider, they often expect a sweeter beverage and are surprised to find that it’s more like a wine. She says telling people that hard cider doesn’t taste any more like sweet cider than a bottle of grape juice tastes like a bottle of wine helps adjust their mindset before sampling. Farmhouse is the sweetest cider available, but Brenda says that it’s still quite dry.
Among the most popular Farnum Hill offerings are the Dooryard batches, which were first wholesaled in 2011 when early warm weather caused bud break in March and subsequent damage to certain apple varieties. “We had a lot of very interesting ciders, but they didn’t fit the profile of the Extra-dry or Semi-dry,” said Brenda. The Farnum Hill website further explains the Dooryard concept; one that is popular abroad where many cider orchards do business on the farm. Local residents can bring their empty bottles and fill with whatever the cider maker taps that day.
Although the cidery is currently located in a barn, there are plans in the works for a new facility. Rather than dealing with tall, narrow rooms designed for apple storage, the new building will offer organized space for more efficient cider production and bottling. “We’ve outgrown our space,” said Brenda, adding that the new facility will blend in architecturally with the existing farmstead buildings. “The space we’re using was designed for apple storage. We have a new building planned and construction should start soon.