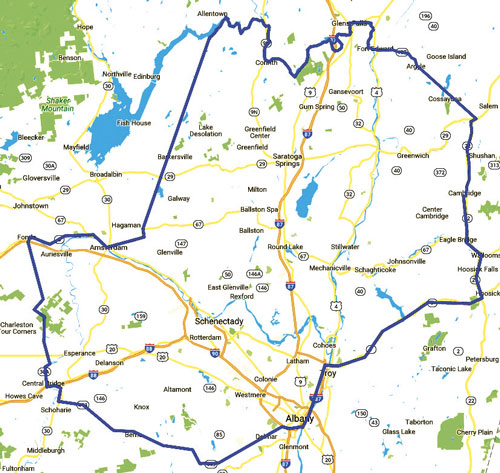 While we are all Americans, we all have regional pride as well. Maryland is proud of its crab cakes; Texas has the biggest everything; and now a 1,650 square mile area in Upstate New York can officially be proud of its wines.

When a winery wants to tell the geographic pedigree of its wine, its label gives its appellation of origin. Appellations are defined by political boundaries or by federally-recognized regions called American Viticultural Areas (AVAs). The Upper Hudson AVA was approved on Dec. 6, the final rule effective Jan. 7, after years of dedication from those supporting its recognition.

There are strict rules on what can be considered an AVA. Current regulations require evidence that the name of the proposed new AVA is locally or nationally known as referring to the area; that there is historical or current evidence that the boundaries are legitimate; and that there is evidence that growing conditions such as climate, soil, elevation and physical features are distinctive. Those who wish to create new AVAs must petition the Alcohol and Tobacco Tax and Trade Bureau (TTB) of the U.S. Department of the Treasury.

The TTB defines AVAs at the request of wineries and other petitioners. Before the AVA system, wine appellations of origin in the U.S. were based on state or county boundaries. AVAs range in size from the Upper Mississippi River Valley AVA at 29,900 square miles across Illinois, Iowa, Minnesota and Wisconsin to the Cole Ranch AVA in Mendocino County, CA, with 60 acres.

Andrew Weber, president of the Upper Hudson Wine Trail and lead petitioner, likened the process to writing a high school report. “It was a lot of data gathering. I took the temperature data from stations in the region and pointed out this area was different,” Weber said. That region is located to the north and west of Albany – defined as “the non-tidal portion of the river above the Federal Dam in Troy, NY.” It includes parts of or all of seven counties. Weber said the temperature data he collected also showed the average growing days for the region, which is part of what set it apart from the Adirondacks and Vermont, which tend to stay a little cooler.

If a wine is designated with the name of an AVA, federal regulations require that 85 percent or more of the wine be derived from grapes grown within the boundaries of the AVA and that the wine is fully finished within the AVA.

The petition for the Upper Hudson AVA was accepted as perfected by the TTB on July 30, 2015. Then the waiting game began. It wasn’t wasted waiting for those in Washington, D.C. to approve the petition, though. While that process played out, New York Governor Andrew Cuomo signed Upper Hudson Wine Trail legislation into law in August 2017. Weber believes the time delay in the federal process was due in part to the change in presidential administration at the beginning of 2017.

“This will help up-and-comers – support them,” Weber explained. The AVA has nearly 65 acres of vines planted and 19 vineyards. The TTB will now allow the wineries to use the term “Estate Bottled” or use the Upper Hudson AVA name on their wine labels.

“The TTB label on bottles identifies the wine and describes its origin. It’s great consumer information,” Weber said. “In the future it will help identify more distinctive wines from the region. It adds value to the wines. It’s branding. It’s legitimacy.”

The vineyards in the region grow cold climate grapes, with a lot of varieties developed by the University of Minnesota, according to Weber. They include Marquette, Frontenac, St. Croix, LaCrescent and LaCrosse. “They make wines you may not have tasted before,” Weber said. “They are local, authentic products.”

There are more than 20 producers in the region making wine and more – “everything fermented,” according to Weber. “If it’s found here, it’s fermented here.” That includes mead and cider.

“The trail and the AVA are both assets to help drive economic growth in the region. We want to become a region known for world class hardy grapes and their wines,” Weber stated. “Officially becoming an AVA will be a multiplier. Everyone has to eat somewhere, everyone has to sleep somewhere. We want to make the region a destination, and that will take time and resources.”