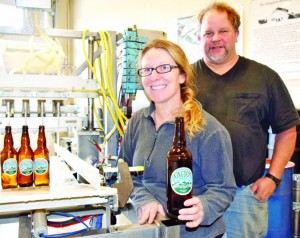 by Bethany M. Dunbar
NEWPORT CENTER, VT — Brian and Jenn Cook are ready to take their farm and brewery into a new phase of production with a 22-ounce Meheen bottling machine, purchased thanks to a $20,000 grant from the Working Lands Initiative through the state of Vermont.
Kingdom Brewing has been able to sell kegs and fill half-gallon growlers with screw-on lids, but now they will also be able to fill and cap 22-ounce bottles. They have a tasting room at the farm, and beer sales have been steadily increasing. The couple also has a greenhouse and sells vegetables. They also grow pumpkins for their pumpkin variety of beer.
Additionally, the Cooks raise Angus cattle. They feed the spent grains left over from making craft beers to the animals. As far as they know, they are still the only combined farm and brewery in Vermont. The Angus at the Cook farm love this feed and were recently videotaped running to their spent grains feed for a Vermont tourism effort.
Tourism is part of the Cooks’ emphasis, as many of their customers come to see the cattle as well as to buy beer and vegetables. Brian said he’s had one group dressed to the nines who wanted to climb right into the feeding box to get a closer look at the animals. Spent grains, pasture and hay are the cows’ sole feed, except a little corn as an annual supplement to finish them and help create marbling in the meat.
Brian, a big man with a wide smile who wears shorts half the year, was an electrical engineer before he started the farm and brewery. He puts his skills to work designing systems on the farm, including a geothermal cooling loop for the fermentation process of beermaking.
“It’s all run on theromostats,” said Jenn. It’s a closed circuit with glycol in it, pumped through the circuit to ground and back. These things and recipes are what they talk about.
“I always tell people that’s our pillow talk,” said Jenn with a grin.
Before starting Kingdom Brewing, he worked for a large power company. He left outside jobs behind to help his parents with their rental business, Cooks’ Equipment.
“He’s had great examples of entrepreneurship from his parents,” said Jenn.
His parents decided to sell their business in 2010, which is when Brian and Jenn decided to get cattle and then start a brewery. They had been home brewing for years when Jenn came up with a recipe that seemed like it would be popular to sell.
Jenn works three or four days a week as a dental hygienist. She loves her career and is not aiming to give it up. It has helped her thinking about the science of brewing and microbiology — both in terms of recipes and cleanliness.
The couple is clearly doing something right, as sales in commercial distribution have been increasing 25 to 30 percent each month in the past year.
“Each month our retail sales have increased at least by 15 percent,” Jenn said.
Asked how they create their recipes, Jenn said it takes a lot of conversation. They have two staple varieties, including an India Pale Ale called Out of Bounds. They enjoy trying new recipes to see what kind of conversation they will generate.
“Coming out tomorrow is going to be our 2014 barrel series,” Jenn Cook said. These beers have been aging 12 months in rum and bourbon barrels.
“We brewed a spruce beer this spring,” she added. “That’s a smoked pale ale hopped with spruce tips.”
One of their varieties is called Round Barn Red. Brian Cook grew up in McIndoe Falls, VT, and while he was still in school a round barn from near Barnet was taken to Shelburne Museum. One huge part of it was taken by air.
“They picked that up with a helicopter,” he said. It was a sight he will never forget. Round Barn Red was also inspired by the Robitaille family’s round barn in Irasburg, VT, which is still an active dairy barn.
The Cooks are growing some hops to try making a variety of beer from them once the plants mature.
The brewery is growing fast enough that the Cooks will be looking for an intern to help with the greenhouse next summer.