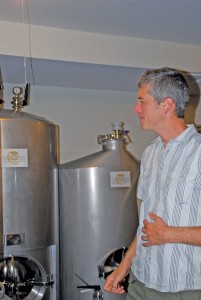 by Jane Primerano
Mark Semakaski operates Artesano Mead on Route 302 in Groton, on the eastern side of Vermont. Artesano is a storefront with small tables and chairs around the main room, surrounded by shelves holding honey-based items, locally made products and books by local authors. The building was the town’s general store and in typical Vermont fashion, a granddaughter of the last owner of the store works for Artesano, Semakaski said.
Groennfell Craft Mead, across the state in Covington, operates out of an industrial park. The owners identify themselves as Ricky the Mead Maker and Kelly the Boss, but their surname is Klein. They have a small seating and tasting area and a shelf full of textbooks on the Middle Ages and the history of mead.
They also keep a wall of plants watered by water from the processing that is too high in phosphorous to go into the sewer system. Besides the differences in ambiance, the meaderies are different in other ways, including in the type of mead they produce. “Each mead maker chooses the style he wants to make,” Semakaski said. In the Mead Halls of the Middle Ages mead was a mixture of honey and water and was consumed mid-fermentation, so it was very sweet.
Artesano produces wine-like mead, generally infused with fruit. “We’ve done blackberry, blueberry, raspberry, cranberry, all with a bright acidity,” Semakaski said. Aging brings the honey wine to the dryer end of the spectrum. The mead is brewed in the fall and the fruit is mixed in the following summer. The mead is brewed in the back room in tanks named after the gods of drink in many different traditions.
Like wines, meads may be appropriately paired with different foods. Some are for drinking on their own, others for pairing with salads, others with heavy foods and others as a digestif. Artesano’s Poet’s Mead, for example, pairs well with bread and cheese. The cranberry is an excellent choice at brunch, Semakaski said.
Semakaski created a sparkling mead. “It’s fun, like a prosecco,” he said. His mead wines are often served chilled, but may be served warmer in winter. Artesano is on the Vermont Wine Trail and the bottles look like wine bottles. Semakaski said he attended a trade show and viewed nearly 1,000 bottles before he picked out the ones he wanted. He hired a few graphic designers to create the labels.
Semakaski and his wife Nichole came to mead making after a stint in the Peace Corps. They gave up corporate jobs in New Jersey and journeyed to Paraguay with the Peace Corps. While there they sampled a native beer everyone drank inspired them to try brewing. They also make honey vinegar. Retailers all over Vermont have Artesano mead on their shelves and Semankaski is working to expand his market.
Ricky the Mead Maker came to his vocation by way of being a nanny, a videographer, a baker, a carpenter and a lumberjack. He and Kelly were brewing as a hobby — beer, wine, cider, saki and sauerkraut — when they decided to open the business.
Like the Semakaskis, who are from Pennsylvania, the Kleins are originally from Delaware. “We wanted to making something people could drink every day if they wanted,” Kelly said. She noted their alcohol content and price are lower than Artesano’s. They are starting to sell their mead in cans because a lot of their retailers only want to sell in cans.  Because of the cost of having their own canning machine, they hire a mobile canning unit to come in as often as possible. “You can take cans places you can’t take bottles,” Kelly said, adding, “Some bars only offer tap and cans.”
While Artesano is Spanish, reflecting the owners’ experiences in South America, Groennfell is Old Norse for Green Mountain, or, Vermont. Ricky studied in Denmark and is familiar with Norse mythology so he actually knew the Old Norse for Vermont. Several Anglo-Saxon textbooks are on a shelf behind the bar.
Artesano gets their honey from two local beekeepers, while Groennfell gets theirs from Ontario. “Pete the Beekeeper,” Ricky called him.
“The state is covered with trees, houses and Subarus,” Kelly pointed out, noting each batch of mead requires just under a ton of honey. Both meaderies use wildflower honey.
Groennfell has four main types. Valkyrie’s Choice is dry and lightly carbonated, Mannaz is reminiscent of a dry hard cider, Chaos Cyser is called the perfect intersection of mead, cider and magic” and Fenberry Draught is a tart cranberry mead.
Using Groennfell’s facilities is Erik Benepe who runs the mead brand Havoc. He also producers four meads: Psychopomp, a sour cherry mead; Bitter Bee, a hop-heavy brew; Fire-Drake, a hot pepper chocolate mead and Root of All Evil, a spicy ginger mead. “Our mead has to be top notch because of all the good beer brewed in Vermont,” Kelly said, noting there are 42 craft breweries in the state.
Every Friday Ricky creates five gallons of a special one-off mead.  “It’s whatever I can think of,“ he said. On “Firkin Fridays” Groenndell sells off whatever is left over from those batches. On the chalk board during a recent visit were: Strawberry Banana, Pizza (basil/pepper), Chamomile, Molasses, Bonfire, Melon and Rose’. “Sometimes they’re good, sometimes they’re ok, a few were awful,” Kelly said.
Pointing out mead can be easier than wine, Ricky is researching a Passover mead. He calls himself the “world’ leading authority on Jewish mead history.” And acknowledges he may be the only authority on Jewish mead history. “There’s nothing in mead that would make it not kosher,” Kelly said.
Semakaski enjoys the opportunity to talk to people who are interested in learning more about mead. He stays away from festivals because they don’t offer the same opportunity to educate customers. Ricky, on the other hand, takes Groennfell to any festival he can find.