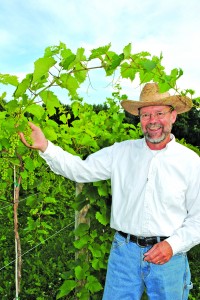 by Katie Navarra
In the fall of 1777, American troops defeated a major British army and forced them to surrender during the Battle of Saratoga, which has been commemorated at Saratoga National Park. The victory was crucial to colonial Americans’ quest for independence and secured essential foreign recognition and support that forever changed the face of the world.
The epic battlefield is clearly visible from the highest knoll in Victory View Vineyards, located west of the national park in Schaghticoke, NY. The crystal-clear view of one of the most crucial battle sites of the American Revolution inspired Gerry and Mary Barnhart to name their farm winery Victory View Vineyard.
Raised in farming families, Gerry and Mary spent a good deal of time working on dairy farms in New York’s Catskill region as youths. After college, the couple pursued careers in public service and in 1981 purchased a home that had once been a one-room schoolhouse on Route 40 in Schaghticoke, NY to raise their three children.
“We settled here because it reminded us of our homes in the Catskills. It was very homey here,” he said. The home was adjacent to a 300-acre farm they later purchased in 2004.
As Gerry planned for retirement, he was committed to returning the land to agriculture. “I was looking for something post-retirement to keep me physically and mentally active,” he said. Together he and Mary researched viable options before settling on a vineyard.
“We joked about it (establishing a winery) at first,” Gerry said, “we both love wine. We did a little research and decided it might actually work.”
In 2008, the Barnharts planted the first four rows in the vineyard with Marquette grapes. Two years later, an additional nine rows were planted to bring the vineyard to one full acre. Over the next several years, additional vines were added, expanding the varieties grown.
Today, Victory View Vineyard grows a combination of Marquette, Maréchal Foch, Frontenac, Melody, LaCrosse and La Crescent grapes, all cultivars well-suited for the colder New York climate.
The vineyard released its first commercial vintage wines in 2013, made from grapes harvested in September 2012. All four inaugural wines won medals in the Finger Lakes International Wine Competition. Three wines claimed bronze medals and the Lafayette, a medium-bodied, fruity, dry red wine made from Maréchal Foch grapes claimed a silver medal.
The estate winery bottled 200 cases its first year and anticipates a significant increase due to a healthy crop harvested in September 2013. “We harvested approximately 12 tons of grapes last September,” he said, “that should be between 600-700 cases of wine.”
Currently, Gerry and Mary do all work to care for the vineyard by themselves. “We touch each vine 12-15 times a season,” he said, “sometimes it’s a handshake and we move along to the next. Others require more intense care.”
The exception is harvest time in September. Family members are compelled to work and neighbors/friends volunteer to help bring in the harvest. Nicknamed the “crush crew”, helpers move deliberately down each row cutting each bunch of grapes from the vines.
“Our crush crew takes about five to seven days to harvest all the grapes,” Jerry said, “they don’t really crush the grapes, they help us cut them off the vine. We start at 7 a.m. every day and finish by 1:30 or 2 p.m. each day,” he said. At the end of the harvest, everyone is invited to a dinner celebration signifying the end of another season.
Throughout the year, Gerry personally provides tastings of all four wines in an intimate tasting room located inside the winery. The winery is currently open to the public on Saturdays.
Victory View Vineyard is a member of The New York Wine & Grape Foundation and a charter member of the Upper Hudson Valley Wine & Grape Association. Gerry currently serves as president of the Upper Hudson Valley Wine & Grape Association, and he is a board member of the New York Wine & Grape Foundation.