Where barley grows, brew will flow 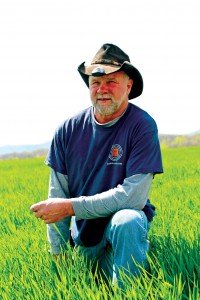 by Karl H. Kazaks
LOVINGSTON, VA — Barry Wood stands on a piece of freshly excavated red Virginia earth, atop a ridge on the Nelson County farm that has been in his family since the 1800s.
Surrounding him are level rows of concrete blocks that will be the foundation of his farm brewery, now under construction.
The building site is surrounded by acres and acres of small grains; mostly two-row barley, but also six-row barley and wheat, which will be the source material for the beer he and head brewer Cory Hall will brew once Wood Ridge Farm Brewery opens its doors. “From the dirt to the glass,” Wood said, “we’ll grow everything here.”
Wood is known throughout the Virginia craft beverage industry as a source of grain for distillers and malt for breweries. Previous customers include Silverback Distillery, Devils Backbone Brewing and Shenandoah Valley Brewing.
But his ambitions are bigger than just supplying others, though he will continue to do so once his own destination farmhouse brewery is complete.
A veteran grower, Wood intends to raise all of the ingredients needed for his brewery’s beers, from herbs like marjoram and basil to honey to citrus, even. He has hop rhizomes growing in a greenhouse and will plant a hop yard next year.
Eventually he hopes to have food available at the brewery, ideally sourced from produce and meat and eggs raised on his farm.
For many years Wood operated a farm stand near Centreville, in Fairfax County, growing much of his own produce, at the family homestead. When development pushed him out of northern Virginia, he came home and continued to grow vegetables. In particular, he has a nice 10-acre field of good bottomland which he’s fitted with a gravity-fed irrigation system. Last year he grew 49,000 linear feet of vegetables, watermelon, cantaloupes, squash, tomatoes and more. This year, since Wood is so busy building his brewery, he’s planted barley, but next year he expects to return to vegetable production.
A few years ago, he noticed the rise in the number of breweries and distilleries and decided to develop a malt house, in what was formerly an airplane hangar on his farm. Wood’s Mill Malt House opened last year.
Steeping happens in food-grade tanks fitted with an aeration system of Wood’s design. The tanks have an internal piping system that when connected to blowers, helps keep the steeping grain aerated and clean, with the forced air also pushing out heat and carbon dioxide.
Once the malt is up to about 41 percent moisture it goes on the malthouse floor. Malting takes place over four days, with Wood and Hall raking and turning the malt regularly, and wetting it when needed. When the malt is about 95 percent modified, they rake the green malt into the kiln. The kiln, built adjacent to the malthouse, has a perforated stainless steel floor built over a plenum into which warm air from two wood stoves is channeled.
When operating at full capacity, the malt house should be able to produce 2,000 pounds every two days. Roasting is also done in-house. “We make all of our own specialty roasts,” Wood said, “from crystal to chocolate.” They’ve just acquired a spectrophotometer for determining SRM or Lovibond ratings of the specialty malts they make.
Wood also has a peanut roaster which he will likely use to roast peanuts, hopefully grown on the farm, to serve to visitors to the brewery.
The brewery’s beers will be malt-driven, with low hop levels. At first, the beers will be available only on draft or in growlers. There will probably be at least six beers, including four flagships. Though the exact lineup is still in the works, Hall expects to feature at least “a good Saison, a Virginia pale ale, and a brown ale.” He’s also experimenting with a wheat wine and a variety of other brews. “This is a big year for R&D,” said Wood. “We’re making a lot of experimental brews.”
Some of the benefactors of that experimentation are the farm’s herd of Black Angus cattle that are raised mostly on grass but are also supplemented with grain, including spent malt.
Wood is growing over 60 acres of small grains: 40-acres of the two-row variety Endeavor, seven acres of six-row Thoroughbred, six acres of hulless barley, and about eight acres each of white winter wheat and red winter wheat. In the future, Wood hopes to raise heirloom barley varieties as well. He’s also planted Hickory King dent corn, and will grow millet, sorghum and buckwheat – all with the eye to using those grains for brewing. (Everything will be non-GMO.)
In terms of outfitting the brewery with equipment, Wood will start small, with the capability to expand with time. Hall is looking forward to a time when he can make sours and barrel aged beers. “We may even do open vat fermentation,” Wood said. “I’m wide open.”
All of the activity making this year such a busy year at Wood Ridge Farm, Wood said, is possible due to the support of his partner and brother, Ronny Wood.
As the business grows, Wood will be looking for even more help – to help him expand the brewery, to realize the many visions he has for turning his farm into an example of a sustainable farm-based enterprise. “It’s our goal to make something unique,” Wood said, “something you can’t find anywhere else. You can’t copy our water, you can’t copy our grain.”
“When our brewery opens,” Wood said, looking beyond the foundation walls of his brewery to the surrounding fields of grain, “people will be able to taste a beer, watching next year’s beer grow. “That’s the experience.”