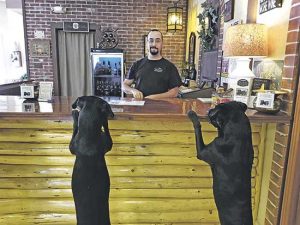 by Laura Rodley
Nestled in the resort area of “ski town New England” people find White Mountain Winery tucked in the back of a building on Route 16.
Once they find the winery in North Conway, NH they return again and again. That’s what Bryon and Ali Gil did when they first discovered the winery and before they owned it. As they have found out, timing is everything.
“We just couldn’t get enough of the wine being produced. We kept going back. The business just fell into our laps. It was nice,” said Bryon who purchased the previous owner’s equipment with his wife in 2013. They changed the name, started experimenting on their own and were soon up and running. It is solely a family operated business, as Ali’s parents Susan Prescott and Daniel Bissen all participate.
Their wine is known for having less sulfites and no added tannins. “As far as headaches — red wine headaches — people have no problems with our wine,” said Bryon.
They have 60 percent less sulfites in their wine as they add less sulfites and there are no tannins because no skins are allowed into the wines. Rather than raise their own grapes, they import juice from around the world that ensures they won’t be dealing with grape skins. Buying from a couple distributors, they use juice from Australia, Chili, Argentina, France, Italy, Germany, California and Canada.
During their first year, they expanded the existing space by adding tables, a production area, storage for the red wine, carboys and fermenting containers. They expanded the kitchen that is used as the starting point of all their endeavors, including sanitizing, wine making and filtering. All told, they have eight tanks and 150 carboys. “We ferment it in that, age it from that, bottle it from that,” said Bryon.
They bottled 14,000 bottles last year, including hand corking the bottles. Though they are open Thursday through Sunday for wine tasting, they have found Friday and Saturday to be their busiest days.
White Mountain Winery sells dry red wines including Cabernet, Malbec and Pinot Noir and dry white wines including Chardonnay Riesling, Pino Grigio and more. They also sell Raspberry Dragonfruit and Açaí Raspberry. “We tend to run out of certain wines very quickly because we tend to do small batches, so our list is always changing,” said Bryon.
They make 30 bottles if they are trying something out and 200 for something more established.
That’s a small amount compared to other wineries, he noted, but it means they don’t have to hire employees and it creates the ambiance in the winery that Bryon craves. Even though he works full time, “I don’t really feel I work a day in my life. I have a really good time.”
Besides creating reds and other wines, the winery is known for donating all of their tips to local humane shelters. They do this in the name of Doc and Lucy, the resident lab/pit bull mixes who have let the Gils know “that they wish to help the other dogs,” said Bryon. The first year, they raised $2,000 to $3,000, the next year $3,000 to $4,000 and the numbers kept growing. So far, they have donated $12,000 to local humane shelters.
If Doc and Lucy could speak “I think they’d say the wine is great,” as they belly up to the bar and hang out with customers.
Some people find the winery by chance as they are going from store to store in the village. Others find them on purpose, after doing searches or hearing about them through word of mouth. “Some people say they had a hard time finding us”, but their customers are not deterred. In fact, it’s part of the winery’s allure. And like the Gils, they keep coming back.