Grapevine trunk diseases (GTDs) are the bane of vineyard owners worldwide, and as of 2012, were responsible for more than $1.5 billion in annual economic damages. While researchers have long known that a host of pathogenic fungi combine to gang up on grapevines, the mechanics of how these GTD-causing fungi work has remained a mystery.

Recently, an international cohort of researchers, led by UMass-Amherst, announced a previously unknown mechanism that is deployed by a group of pathogenic fungi working in concert and which are responsible for the death of the grapevines. Thankfully, it would seem that a fairly easy, cost-effective solution may be on the horizon.

GTDs have been known to devastate up to 30% of the vines in a single vineyard each year, and typically attack older, well-established vines. In California alone, annual GTD-related losses amount to 14% of the total value of the wine grapes produced.

GTD-causing fungi typically enter the vine’s system through pruning wounds and, once established, develop a rotting canker that gradually expands, dissolving the woody part of the vine from the inside out and killing the plant. It’s no easy feat to dissolve the tough cellulose and lignin framework that make up woody plants, but a consortium of fungi have figured out how to do it, perplexing scientists. 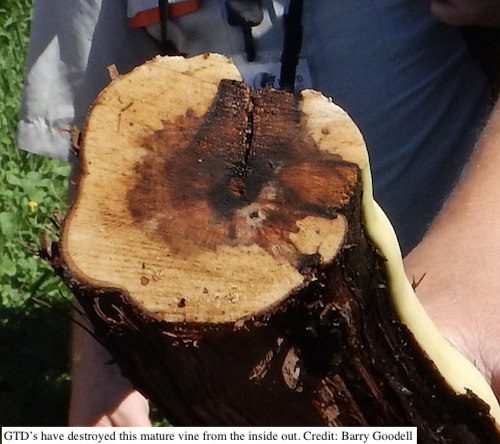 “The missing ingredient,” said Barry Goodell, professor of microbiology at UMass-Amherst and the paper’s senior author, “is an understanding of what very small compounds produced by the fungi are actually doing to the grapevines.”

In particular, Goodell and his UMass-Amherst colleagues and students, along with collaborating scientists from the University of Florence in Italy, the Université de Lorraine and the Université de Haute-Alsace in France and the University of Concepción in Chile, as well as vineyard owners in both France and Italy, have discovered that some of the GTD-causing fungi produce different types of small compounds that are released into the wood of the vine. One of those compounds is responsible for reducing iron. Normally, we encounter iron as the chemical compound, Fe3+. Reducing iron from Fe3+ to Fe2+ sets the stage for some nasty grapevine problems.

“But that’s not the whole story,” Goodell said. “We also discovered that there’s another set of small compounds that are produced by other fungi in the consortia, and these compounds are really good at producing hydrogen peroxide. When hydrogen peroxide meets reduced iron – boom! – the reaction releases a host of oxygen radicals that damage the woody tissue causing an almost cancer-like disease.”

In short, different fungi, each producing one of the two types of small compounds needed for an extracellular bomb, figured out how to get together, mix their respective chemicals and use them to blow apart the cellulose walls of the grapevine’s cells. Once the cell walls are breached, the fungi can feast on the sugar-rich fluid that once was the cellular structure supporting the vine’s own growth. 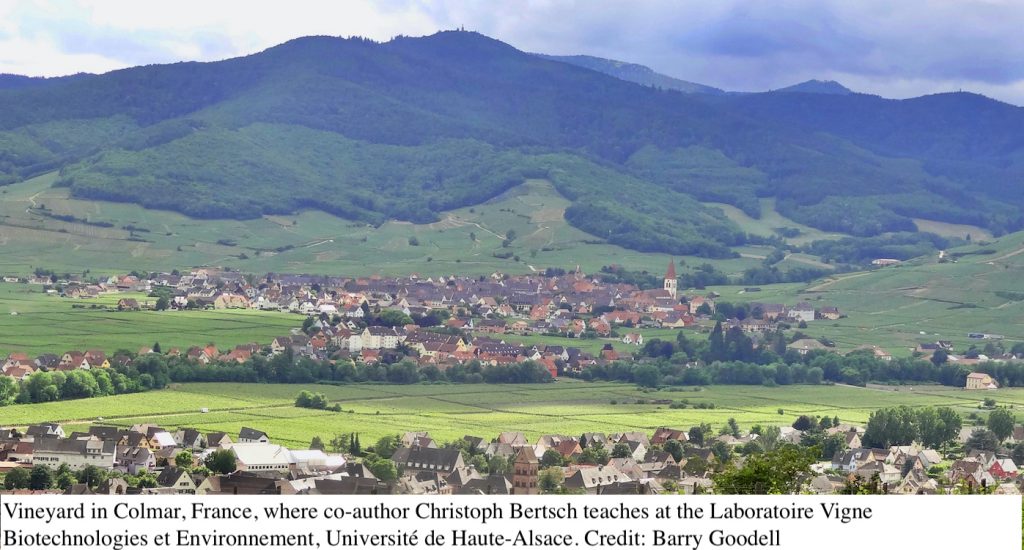 Luckily, there’s a potential fix, which is so common consumers probably eat it every morning with cereal: antioxidants and low-toxicity chelators. Often added to food products to preserve freshness, they also interrupt the production of reduced iron and hydrogen peroxide. They also scavenge the oxygen radicals the fungi produce. “In addition,” Goodell pointed out, “there are some select bacteria and fungi that produce these antioxidant and chelating compounds. Our research shows that we may be able to manage and stop GTDs through ‘bio-control’ treatments by increasing the natural presence of these antagonistic organisms on the vines.

“Of course, there’s still work to be done,” said Goodell. “Vineyard pathologists need to test our research in the field, and other microbiologists will want to verify our work. But we already have colleagues as part of our larger team that are doing this, and we’re confident that this research represents a breakthrough in ways that we understand this devastating disease of vineyards and how to control that devastation.”

The research was recently published in the journals Fungal Biology and Frontiers in Plant Science, and was supported by the USDA-NIFA Hatch Multistate Program and the Microbiology Department at UMass, the French/European VitEST project and Laboratoire Vigne Biotechnologies et Environnement at University Haute-Alsace and DAGRI at the University of Florence, Italy.