SYRACUSE, NY – The National Association of American Wineries, better known as WineAmerica, deals with a lot of issues on a much larger scale than any one winemaker – or even one viticultural area as a bloc. They work with lawmakers to help make the changes that benefit those who focused on creating quality American wines. Michael Kaiser, vice president of WineAmerica, recently presented an overview of the group’s various projects at the Eastern Winery Exposition.

It may surprise some that one major issue wineries have been dealing with has very little do with wine. Many wineries have tasting rooms and outdoors spaces in which they invite performers to come play music for guests – and these performers are required by federal law to be licensed to play copywritten music. A music license provides the winery with the legal authorization it needs to play music and it protects the business from penalties involved in copyright infringement.

When music is performed, the songwriter and recording artist of the original composition are owed a royalty. Additionally, owning digital audio files (as well as CDs and vinyl records) intended for personal use and playing them for an audience beyond “a normal circle of friends and family” requires a license.

A music Performance Rights Organization (PRO) represents songwriters, composers and music publishers. They collect royalties from licenses and pay them back to the artists. There are three PROs (BMI, ASCAP and SESAC) which can be paid for separately. They do offer “blanket licenses” which cover all three groups that allow the performance of all the copyrighted music in their catalogues, but these can be expensive.

That’s why WineAmerica provides direct assistance to wineries to find the correct license for the lowest cost possible. In addition to discounts and licensing ownership, the organization has a comprehensive contract template for wineries and the musicians they hire to perform to use.

WineAmerica is part of the Music Innovators Consumers coalition in Washington, D.C., working to protect wineries’ access to music and put in place a mechanism to know what is contained in each PRO’s respective repertoires. Right now, it is impossible for wineries to know for sure what PRO represents what music. “Transparency is a huge issue with this,” Kaiser said.

There has been some success. Work with ASCAP made music licensing simpler with a unique winery license, lowering the square footage for smaller wineries, removing the requirement to purchase separate licenses for different venues on a winery’s property, introducing live and recorded music options, offering a seasonal discount range and provides a special reduced price for wineries with under 5,000 gallons sold. WineAmerica also collaborated with BMI to create “TOTAL BMI,” the only available list of 100 percent licensing rights.

More information on this topic is available at wineamerica.org/benefits/music-licensing .

There were some issues with the language of a last-minute Congressional amendment, however, Kaiser noted. The first is with bonded wine cellars, as wine held in a bonded wine cellar is currently ineligible for credits after the TTB established an “alternate procedure” to allow for transfer of the wine back to the producer. The second pertains to bulk wine transfers, with tax credits only available for wine produced at a winery, not purchased. The final issue was with custom crushing, as credits can only be applied toward overall wine production, not individual brands.

“We’re working on fixing these issues,” Kaiser said. “Ron Wyden (D-OR) and Roy Blunt (R-MO) are lead co-sponsors of the bill [to update the act]. There are 60 senators split evenly, Democrat and Republican, showing support for revised bill, which will retroactively fix problems and aims to make the excise tax cuts permanent.” 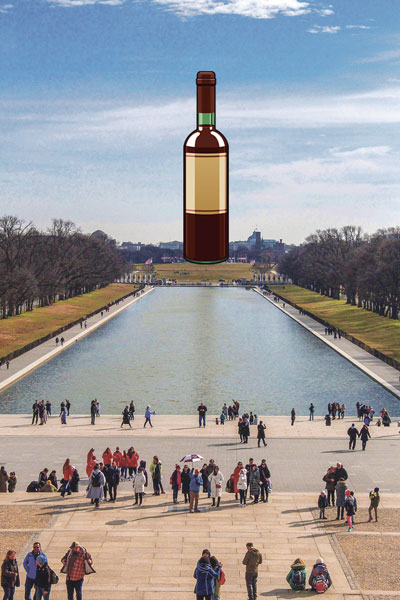 When it comes to the timeframe for label approval, the TTB aims for a turnaround of about 15 days, according to Kaiser. After the partial government shutdown earlier this year, that wait time jumped to about 40 days. WineAmerica is working on pushing increased funding for the TTB ($139 million in Congressional budget, with $15 million specifically designated for the next two years to keep the bureau running if there are more government shutdowns, “due to the unpredictability of this administration,” according to Kaiser.

In regards to labeling, one attendee to the legislative update inquired about QR codes to “bring labeling into the 21st century.” Kaiser said that is something that could be lobbied for, but producers are currently “hamstrung by what is required by law.”

Other issues touched upon included the new USMCA trade policy. “If our wine is not exported, the competition comes right back here,” Kaiser said. “It’s important for the market to remain open.” USMCA made wine a priority, specifically in regards to exports to British Columbia. Under the terms of the USMCA, British Columbia has agreed to end its practice of not allowing imported wines to be stocked on their grocery shelves. The Canadian province has a population of 4.8 million, and according to the USDA, wine exports to British Columbia totaled $56 million in 2017, with U.S. wine holding a 10 percent share of their market.

As for regulation, Kaiser noted the TTB extending their comment period on proposed rule 176, “Modernization of the Labeling and Advertising Regulations for Wine, Distilled Spirits and Malt Beverages,” to June 26.

According to the bureau’s website, the TTB is proposing to amend its regulations to simplify and clarify TTB’s alcohol beverage labeling and advertising regulatory standards, and incorporate statutory changes, international agreements, recent case law and current TTB guidance documents and policy into the regulations. To see the proposed rule and any comments related to it, visit www.regulations.gov/docket?D=TTB-2018-0007 .

It was noted that the newest version of the Farm Bill allows winemakers to apply for Specialty Crop Block Grants to develop new wine trails, and that the bill’s Market Access program has designated $200 million for marketing American-made wines overseas.

Jim Trezise, president of WineAmerica, said all these issues are priorities for the association, since they impact winemakers every day. WineAmerica has a D.C. fly-in every spring to visit with Congress to bring their issues to the fore. “Like our motto says – ‘Diversity is our strength, unity is our power,’” he said.