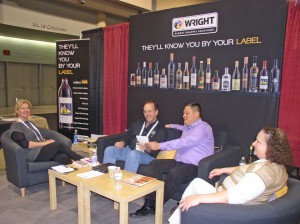 by Karl H. Kazaks
RICHMOND, VA — This year, for the first time, the comprehensive trade show previously known as Wineries Unlimited was billed as Wineries + Breweries Unlimited, a nod to the burgeoning craft beer industry in the eastern U.S.
A large crowd attended the four-day event, which included more than 140 exhibitors on the trade floor and dozens of seminars. Attendees came from up and down the east coast, with vendors coming from around the world.
The conference’s seminars included some multi-day events like the VESTA sensory evaluation workshop. Other seminars at the event touched on a wide array of themes relevant to the conference, such as sales and marketing, management and finance, and the science and art behind wines and other craft beverages. Specific sessions included advanced enology and viticulture, a panel discussion with wine bloggers, a sanitation course for brewers, a session for start-up brewers, sessions on regulations affecting wineries, breweries and distilleries, and many more.
At night, evening social events reflected the conference’s new expanded audience. Not only was there a Tour de Vin, with wine tastings from around the region, but on the following night there was also a Tour de Brew, with a tasting of regional craft brews. Regional producers also offered samples of their wines for tasting on the trade show floor, a favored amenity among attendees. There also was lively activity on the trade show floor, with vendors meeting with existing customers and establishing leads, and participants making new contacts with exhibitors in attendance.
For example, Jerry Culver is building the first winery to operate in western Georgia since Prohibition, planting varieties suitable to the region like Norton and Blanc de Bois. Last year, Little Vine Vineyards had its first harvest — some 20 tons — but he had to ship his fruit to a winery in northern Georgia for custom winemaking. Culver traveled to the conference to gather information about how best to build and outfit the winery under construction at his vineyard.
For example, he consulted with Steve Burchan, President of AaquaTools, about the size requirements of the on-demand hot water heater he plans on using at his winery. He also spoke with Burchan about AaquaTools’s washing, cleaning, and sanitation machines.
Tom Costello traveled to Richmond from New Jersey, where he operates a wine school where students make their own custom wines, in lots sized from full barrels to five gallons. The school uses purchased juice and must, and is focused on producing wines for consumption in the near-term, and so is not interested in long barrel-aging.
It is, however, interested in being able to produce wines in a variety of styles, and as such Costello had a nice long discussion with Joshua Rubin of miwinebarrel, which supplies not only wooden and stainless steel barrels but also a variety of oak chips to add flavor and texture to wine.
“Stainless steel is perfect for what we’re doing,” said Costello. He was interested in a steel barrel design Rubin had on display, in which the oak chips are inserted into the barrel through a sleeve, which can be removed once the desired amount of oak character has developed in the wine.
Jason Knight of Virginia’s Saudé Creek Vineyards was at the conference looking at the Deer Busters fence on display at the Trident Enterprises Booth.
“We’ve got to plant a new block,” Knight said. “We’re looking to do something different, something easier to put up.” He was interested in the Deer Busters design, in which the bases are set in the earth, and then the poles set into the bases.
Geoffrey Giruad of CDA (Chabot Delrieu Associés) USA also traveled from within Virginia to showcase his company’s automatic labeler, Regionale. The machine — which can apply up to three labels per bottle and can label 1500 bottles per hour — is compact, easy to use, and adapts easily to different bottle sizes and shapes by means of a height-adjustable labeling station.
Dennis van den Munckhof came all the way from British Columbia to display some of the vineyard equipment made by his family’s manufacturing company, Munckhof.
“It’s built in North America for the North American market,” he said. “It’s built with North American parts and pieces, so it’s easy to work on.”
William Livingston was part of the team from Gemeny Family Vineyards and Winery at the conference. Not only was he looking to build his acumen as a taster (in the VESTA workshop), but he was helping the winery find an automated netting system. Last year the winery did hand roll nets, and still birds were able to get through seams in the netting, drastically impacting the yield on the wineries’ Traminette crop.
This year, thanks to their visit to Wineries + Breweries Unlimited, the team at Gemeny hopes to have a better solution for those pesky birds.