Winery tucked into the woods near Snow Camp 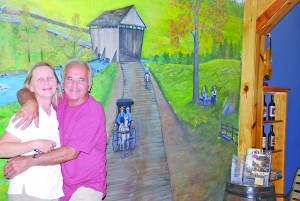 by Jane Primerano
Snow Camp, NC sets the stage for an outdoor historical drama called “The Sword of Peace,” on farmland near the yellow blinking light and the gas station/quick mart at the center of the tiny hamlet, located in the Piedmont region, in central North Carolina.
The theatrical performance was pretty much what Snow Camp was known for until Floyd Wolfe decided to branch out from his excavating and construction business and build a winery, which is tucked into the woods near the Old Dam Road.
Wolfe Wines is in a rustic building surrounded by grape vines, with a covered pavilion and comfortable chairs on its front porch.
“Family run, family built,” Jimmy Wolfe says of what his father started and the rest of the family helped develop. Floyd Wolfe is a builder by trade, but that didn’t prevent him from breaking a leg during construction.
On a recent Sunday, a steady stream of customers keeps the Wolfes on the run, pouring wines for tasting and keeping up a steady stream of chatter with some regulars, among them a cousin picking up wine for their 95-year-old aunt.
Wolfe Wines features a number of fruit wines, most available in dry, semi- and sweet versions. They grow some of the fruit they use and try to purchase what they must from other North Carolina growers.
Nina Wolfe says the figs for their unique fig wine were from her tree, but the harvest was slight after the unusually tough winter that coated the rolling hills with ice many times. Nina said she never thought she’d have to wrap fig trees as they do in the Northeast — which sparks a discussion of importing an elderly Italian gentleman from New York to help.
Between tastings, customers chat with the gregarious Floyd Wolfe, one asking if she could hold the fiddle he made. Wolfe, a self-taught fiddler, then treats the group to a song.
It was Floyd’s fiddling and love of bluegrass that led to the winery, he explains. The Wolfes would make wine and take it to bluegrass festivals to share with their friends. They did this for 30 years while friends started encouraging them to turn the hobby into a business. In 2008, they did.
One friend, Stephen McPherson, strolls in and sits in a rocking chair near a mural on the wall opposite the entrance. The mural was painted by McPherson’s mother, Yvonne, and features the Wolfes, Yvonne and her husband, and Stephen on his horse, Zeke.
Then Wolfe points out his grandchildren and nephew are depicted playing in a stream on the mural and Nina mentioned another local artist, Robert McCabe, who creates the wine labels.
Wolfe keeps pouring wine for tasting. Two of the customers are from South Carolina.
“Foreigners,” someone says.
Cindy Reid, a regular, stops in for “Friday night Merlot.” The name is “Moonlight Merlot” and the label features a wolf howling at a full moon.
“My husband is diabetic, this wine is better than most for him,” she adds.
Neighbor Nelda Stephens comments the cranberry wine she bought for last Christmas disappeared too quickly. Wolfe explains it’s a mixture of dry and semi-sweet tastes.
The blackberry wine is a little sweet, but conveys not only the taste of this wonderful fruit but also the feeling of sliding your had between the thorns and dropping the berries into a bucket.
Black and Blue is as close to a perfect blend of the two fruits as possible. The label is the most dramatic of the varieties with an illustration of a wolf and a full moon. Cherry tastes like homemade pie. Raspberry appeals to even non-raspberry lovers. Kiwi wasn’t available for tasting, but the label features both the bird and the fruit.
The more conventional wines include a dry Niagara that is dryer than expected, and delicious. The dry Chardonnay is robust.
A very special wine is Simon’s Gold. It’s made with the North Carolina state fruit, the bronze muscadine. The name comes from a legend that Simon Dixon, the protagonist of the outdoor drama, The Sword of Peace, hid gold somewhere in Alamance County, probably near Snow Camp. The fact that he was both a farmer and a Quaker probably precluded him being a wealthy man, but old legends die hard. Buried treasure or no, it’s a wonderful wine.
Wolfe Wines has hosted weddings, girls’ days out and other events. The winery throws an anniversary party each fall. Other special events are listed on the website, www.wolfewines.com.