Working together to grow an industry: New England Brew Summit 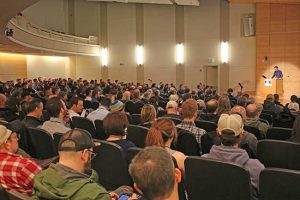 The University of Southern Maine (USM), Portland, ME welcomed the 2nd Annual New England Craft Brew Summit on March 31, 2017, hosted by the Maine Brewers’ Guild. Glenn Cummings, president of USM, welcomed over 500 craft brewers as representatives of an industry “with more plaid [and] more beards than any Maine logging company.”
The keynote speakers were Bart Watson, chief economist at the Brewers Association, and Katie Marisic, federal affairs manager at the Brewers Association, both willing to maintain the jovial atmosphere. Both supplied statistical data showing how the craft brewery industry in the region has been growing, with IPAs being the most preferred style in New England.
With more than two breweries opening a day nationally, the field is becoming more competitive, but the New England region is cooperative rather than competitive. This attitude was apparent as neighboring breweries openly discussed their brews and provided advice. One such example of this is Austin Street Brewery, a small brewery in Portland. Located in sight of Allagash Brewing Company, the two are in frequent contact with each other and are friendly.
As the keynotes finalized their talk, they stressed that the industry is growing and that there is a rise in the craft beer market and a reduction in the premium brands.
The seminars were in three sessions with several options each session following either a business track or a technical track. Industry experts as well as fellow brewers shared their experiences and answered questions from attendees. Throughout the day, USM had a lab open house in which attendees could see the technical aspect of brewing while conversing with students of the curriculum.
Over 25 vendors were present from across the industry, ranging from hops and malts to insurance and labels. When the tradeshow was open, local breweries offered their brews to the attendees for tasting.
Although it was only the second year, the New England Brew Summit was viewed as a success, and it should. As support for the industry increases, New England is emerging as a catalyst. Simply put, six states are working cooperatively to make their entire industry grow.