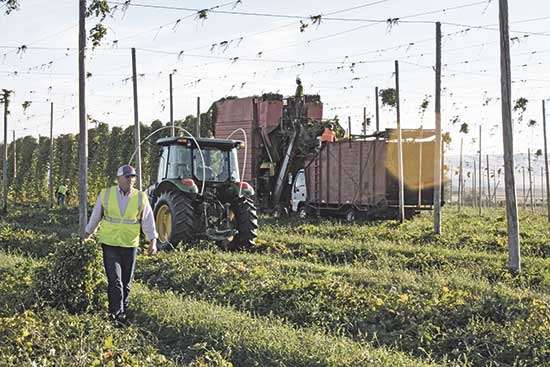 by Catie Joyce-Bulay
As the popularity of hoppy beers continues to grow, more and more fresh hop ale festivals are popping up all over the West during harvest season. What better home for a fresh-hop focused festival than Yakima Valley, WA where over 75 percent of the country’s hops are grown. The Yakima Fresh Hop Ale Festival, now in its 15th year, saw around 6,500 attendees, up at least 500 from last year.
The party started at the beginning of the week, during Fresh Hop Beer Week produced by the nonprofit Fresh Hop Beer Group. The week-long events and festival takes 550 volunteers to put together and all proceeds go to a variety of arts and science-related programs throughout Yakima Valley.
Events of beer week included brewer’s dinners, special tastings and games throughout the downtown area and the valley at several of the local breweries. Although the Yakima Valley has been a key producer of hops for generations, its craft brewing scene has begun to come into its own only over the last few years. The Valley is now home to 11 craft breweries and counting, and the festival is a great way for local breweries to showcase their hoppiest offerings to attendees, visiting primarily from Washington and Oregon, with some visitors traveling from other parts of the country and world to experience the harvest.
On Friday attendees had the opportunity to tour Hopsteiner, one of the largest hops growing, trading and processing firms in the world. The tour, offered as a limited-ticket event, was led by one of Hopsteiner’s hops breeders. He provided information on farming and on the over 10-year process it takes to introduce a new hop variety to market.
The tour bus, full of both beer-lovers and industry professionals, stopped in one of the fields to watch hops being harvested by a combine. Hopsteiner, a sixth-generation farm that also buys and brokers from other farms, is one of only two that harvests with a combine, which gets a head start on the separation of bines and cones typically done after the crop reaches the processing facility.
The tour ended at their year-old processing facility with a barbecue and the opportunity to sample beers from around the country made with their hops. Facility tours were offered, allowing visitors to get an inside peek at the process from separating the cones from leaves, to drying, to packaging the bales.
The week-long events concluded with the Fresh Hop Ale Festival, where 54 breweries came together in downtown, including 11 brewers local to the Valley, 28 other Washington breweries and 15 regional breweries hailing from Oregon, California, Idaho, Colorado and Montana.
“We love the Fresh Hop Ale Festival,” says Meghann Quinn, co-owner of Bale Breaker Brewing Company, located in Moxee, WA. “Not only is our favorite festival in our own backyard, it’s great exposure for Yakima and the importance of the hop industry to our Valley.”
Quinn, who is also involved in Craft Beverage Yakima, the region’s craft beverage marketing association, says the festival is a great opportunity to promote the craft beverages of the region. “Putting Yakima on the map as a beer tourism destination has always been a goal of ours at Bale Breaker,” she says. “The Fresh Hop Ale Festival, and now Fresh Hop Beer Week leading up to the festival, really helps drive that message home on a larger scale.”
Admission to the festival included five tokens to exchange for a half pint of beer each. All participating breweries offered samples of their fresh-hopped beer, which was entered into the fresh hop ale competition, in addition to another style, typically a hops-heavy ale for this lupilin-loving crowd. Music, lawn games and a variety of local food trucks complemented the ales. The festival was adorned in hop bines, including a busy selfie booth where participants could get up close and personal with their favorite beer ingredient.
Each brewery must enter a fresh hopped (wet hopped) ale into the competition. “Typically this means that the hops need to be harvested from the vine and then used in the ale within 48 hours,” says Sabra Nelson, co-chair of the festival. Fat Head’s Brewery of Portland, OR took best of show. Seattle, WA’s Cloud Burst Brewing took first place for the fresh-hopped pale ale. Skookum Brewery of Arlington, WA took first place in the fresh-hopped IPA category, and Bale Breaker Brewing Company won first in the fresh-hopped Imperial category.
The festival can be a great way for new breweries to create some buzz while first breaking into the market. Bale Breaker, who has been a festival participant since 2012, joined before their production facility was even finished. “We were brewing on a 10-gallon system at our family’s hop farm while we waited for construction on our brewery to be complete,” she says. “Our fresh hop beer won an award that very first year. It really helped us get exposure to beer drinkers before we had product available to sell.”