Zeolite, a possible enhancement for your vineyard 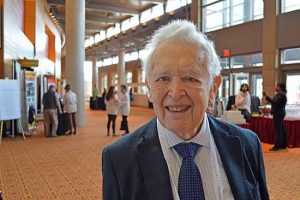 by Steve Wagner
Whoever said politics make strange bedfellows never attended a wine expo. While mingling at the 2016 edition of the Eastern Wine Expo in Lancaster, PA, I was engaged in conversation by a charming gentleman named Immanuel Lichtenstein. Manny, as he is called, is the 94-year-old president of Agricola Metals Corporation in Princeton, NJ. What Mr. Lichtenstein wanted to discuss was zeolite. As a mining engineer, he was eminently qualified to talk about this. Being a Princeton alumnus, a member of the Princeton Geology Librarians and running his consulting practice from that town, Manny had viable credentials for informing me about the applications of zeolite to grapevines.
If you have a feel for volcanoes, particularly in Italy, you might have stumbled across zeolite. Zeolite is a mineral which is now finding applications in the agriculture community. Going back to Rome’s heyday about 2,000 years ago, zeolite was used in water purification. Zeolite was plentiful, yet largely ignored by the masses and finding favor, seemingly, with only selected professions who deemed its presence a cornucopia. It is found in volcanic geologic deposits.
Zeolite was discovered to have rich soil enhancement properties. Zeolite can also be mined and strip-mined. “It has a lot of air volume,” says Dr. Larry Zbilski, Vice President of Research at Texas Plant and Soil Lab. “In my view, more important is its ability to retain and exchange plant nutrients in a soil environment.” Soil additives have been available for years in varied strengths and types and now there is zeolite. “A lot of organic vegetable growers have used it for many years,” maintains Zbilski, “to soften up and mellow out their soils with vegetable production. In recent years I have noticed an increased interest in the material for other applications. It has been around awhile but perhaps more recently, due to grape growth, we should also look at getting it into other crop systems.”
Further, he explains, it is a porous material which has a tremendous ability to hold water and nutrients. It is so useful in that regard when it is applied to the surface of the soil, it will eventually work its way into the soil.
For run-off purposes Zbilski doesn’t think zeolite would be of primary use in that particular activity. Retention and exchange of nutrients in a sandy soil might best show zeolite at its best. “To me, that is the ideal application,” Zbilski says.
Grape growers, like growers of other crops, often tend to over-fertilize. I asked Zbilski if zeolite can serve as a monitor or shock absorber of such zeal. “That is true,” he affirms, “unless it is completely overwhelmed. It can serve as a buffer for over application; it can also protect roots from an excess of nutrients and soil pollution. There is an equilibrium established between nutrients in soil solution and nutrients on the exchange location in those zeolites.”
Since many people reading this are unfamiliar with zeolite, I asked whether there are some brand names of the product which stand out more than others. Lichtenstein said, “Some very small quantities are sold largely for health purposes, but it is ridiculously expensive for agriculture applications.”
He suggests looking at trial samples in 50 pound bags, or 25 kilo bags, or even a ton which comes on a pallet, usually shipped in 40 bag quantities.
“I’m just talking about natural zeolite,” says Lichtenstein. “There is also a synthetic zeolite used for high definition uses such as oil refining. The most interesting and important difference is the cost. Synthetic zeolite is four times the cost of the natural.” The purposes for each are, of course, different. “The only source for agricultural use is the mined product,” he affirmed.
One method of introducing zeolite into a vineyard is to put it into the original planting when preparing the soil. Zeolite is appropriate in sandy soil, and also as a top dressing in established vineyards. “Grapes will grow almost anywhere,” says Zbilski. “We look at the capacity of the soil to deliver the nutrients essential to grapes. Soil capability has to do with water holding capacity, soil structure, aeration, and drainage — all to improve grape quality.” A clay soil, he says, much of which can be found in the mid-Atlantic region and is very well aggregated, should have a good permeability.