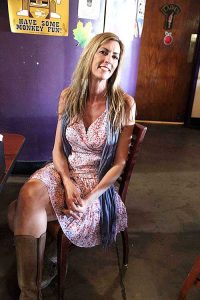 by Laura Rodley
As soon as the doors of Nimbus Brewing Company LLC opened for the day’s business in mid-November, customers were waiting to buy a brew in the taproom or order lunch and eat it out on the terrace overlooking the Santa Catalina Mountains and freight trains and watch the errant roadrunners who are relaxed enough to mosey nearby.
Their iconic mascot is the monkey, reflected heavily in art on the walls, T-shirts that they sell, and in the names of the beers they brew — such as the 2,000 gallons of Nimbus Old Monkey Shine, an English strong ale, that Cellar Master Ed King was making on Nov. 18 at the brewery in Tucson, AZ. The monkey was chosen for a symbolic reason. “We humans need to be lighter in life, not quite so serious, lighten up, run, jump, and play,” he said.
King, a Tucson native son, brewed his first batch of beer in 1987. He progressed, going on to brew his first professional batch of beer nearly 20 years ago, for the owner of the original Nimbus Brewery LLC, Nimbus Cousin. He easily recalled the date, Dec. 23, 1996.
The brewery is now owned by Patti Counts, who purchased it in 2006. Relaxing at a table with customers, she is quick to point out that this upcoming 20-year anniversary celebration occurs, according to the Chinese zodiac calendar, in the year of the monkey, which she finds very fitting. This anniversary is printed on the brewery’s huge welcome mat at the front door.
When the brewery first opened, they were using a 10-barrel system, and producing 4,000 barrels annually. Now they are using a 30-barrel system, producing approximately 14,000 barrels annually with 18 24-foot tall brite tanks and one brewhaus.
King makes brewing appear easy; the mark of a master, but orchestrates the brewing with precision. When the cup of antifoaming agent needs to go into the boiler holding 1000 gallons, it needs to go in immediately. The brew cooks for 90 minutes.
“We use British Malts; some of it’s British, some of it’s from the Northwest,” said King.
He follows the brewery’s own recipes, which he and fellow brewer, Jesus Samaniego, another Tucson resident, constantly review and sometimes adapt.
“I enjoy cooking, so brewing is very culinary. It involves so many different parts of work, from chemistry to volume. It allows one to be creative,” said King.
What does he like best about brewing? “I like brewing new beers and setting them down before the public and hearing their response. Hopefully it’s positive,” he said.
The traffic flow into the taproom, just steps away from the in-house brewery, varies and is hard to predict, he said. “Quite often, Thursday and Friday are busy. People use Nimbus as a venue to play music. Motorcycle clubs meet here. We have original members – customers — who have been coming here for 20 years.”
Samaniego said, “I like to try different things, like the ale beers. I like to make people happy, the world, everything that has to do with beer. A lot of people have to go to different breweries to get the different beers that they like.” His mission is to continue to offer a superior variety so customers are, “not going to other breweries when they can come here and have our beer.”
Samaniego said, “The key for really good flavor is the hops. Out of the hops come the nice aroma and ‘mouth feel.’”
The customers must agree, because they kept barkeep Sherri Simbari hopping at the bar at noontime, serving Nimbus Monsoon Imperial IPA. Other beers include Nimbus A-1 Pilsner, Nimbus Nut Brown Ale, Nimbus Oatmeal Stout, and Nimbus Rillito Red Ale.
The brewery and adjoining taproom together create its own welcoming, laidback atmosphere. Another signature icon, an appealing car-sized hand out front offering a mug of foaming beer invites the public in.
Does owner Patti Counts have anything she’d like to add?
“Drink responsibly. Drink Nimbus.”