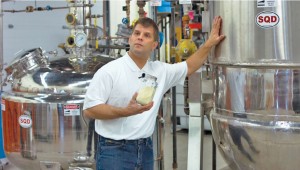 by Tamara Scully
“The State of New Hampshire is a great place to open a distillery. The New Hampshire Liquor Commission is very pro-business and have really helped the industry out,” Kevin Kurland, owner of Smoky Quartz Distillery, in Seabrook, NH said. “We are allowed to have our own tasting and retail room where we can sell all of our products. In addition, I’m in about 50 New Hampshire liquor stores and more than a dozen bars and restaurants in the Seacoast area.” Add in pending distribution to Massachusetts, a potential on-site farmers’ market featuring other craft breweries and wineries and a planned food truck ‘rodeo,’ and Kurland is one busy guy. But this owner isn’t going it alone. He’s in a partnership with his father, his stepfather, his uncle and his brother, all of whom are, as is Kurland himself, military veterans.
Local, Organic, Natural
He also couldn’t do what he’s doing without local and regional farmers. In fact, Kurland so loves the Granite State and its bounty that he named the distillery after its official gem stone, the smoky quartz. Both the Solid Granite Vodka and the unaged corn whiskey, Granite Lightning Moonshine, are made from a recipe which uses 100 percent corn mash. “A big part of my business plan is to source as locally as possible and to use American as much as possible,” he said. “The first step is to use local and organic where possible. All of my grains are certified organic.”
To find the 2,500 lbs of corn he needs to make 1,000 bottles (750ml) of his signature vodka, he began calling mills, dairy farmers and others in the farming community. He originally found a mill in Maine that could supply local organic corn meal. But they are no longer in business. He’s got farmers lined up who can grow the corn he needs, but obviously it won’t be available until the corn harvest this fall.
“Since there is no real definition of what local means, I decided to define local as within a 120 mile radius. If I can’t find a local supplier, I will expand my search radius to find what I need. I would love to find a source of New Hampshire-grown organic corn and in the future, rye and other grains,” Kurland said. Pure water is another key ingredient, insuring that beverages distilled here will have no aftertaste and require no additives.
“I choose to use certified New Hampshire spring water because it has never had chlorine, fluoride, ph buffering or other things added to it,” he said. “I think the water makes a huge difference in the taste of my spirits.”
While the Grade A molasses used in making the unaged white, Granite Coast Rum is sourced from Louisiana, it’s only because “sugar cane is kind for tough to grow in New England,” Kurland emphasized.
Kurland is also planning to use locally-grown flavorings, such as local honey and fruits. But these will be for flavored spirits, offered in-season as the crops become available, and not used to cover up off-tastes.
“Federal Law allows a certain amount of sugar and citric acid to be added without disclosure,” Kurland said. “Some distilleries do this to mask off flavors or smooth out ‘burn’ in the taste of their products.” The careful attention not only to ingredients, but to the process of fermentation and distillation itself, is what leads to a premium product.
Marketing and Sales
“I ultimately get hundreds, and sometimes thousands, of views on my Facebook posts,” Kurland said. “The ‘paid post’ feature of Facebook allows me to inexpensively and easily expand across regions and demographics that may not have heard of me.”
His demographics range from those interested in veteran-run businesses, to those interested in craft beverages, and expands to those with a local and organic food focus. He believes in supporting other local businesses, and that includes other craft distillers.
“You won’t get far in this business by only promoting yourself. I’m always sending customers to visit other New Hampshire distilleries. I don’t view fellow distillers as competition; instead, we help each other out,” he emphasized.
Kurland is looking to hire his first non-family employees this year. He is currently aging a bourbon, which will be available this year, too. He believes there is room for growth, without compromising the integrity of his craft products.
“I think the key really is the human touch. If the distiller is too far removed from the distillation process, it then becomes more of a factory product than a craft product, which is not something I find desireable,” he said. “The key is to scale properly. If it is done correctly, a craft business can grow large but still retain its craft roots.”
So what is his advice for others seeking to join the ever-expanding craft beverage production business? “As in any business, you need to be ready to accept a high amount of risk and a ton of debt to get things rolling,” Kurland said. “Be prepared for many, many bumps in the road. It’s not an industry for the timid. This has been an incredible journey, and extremely challenging.”