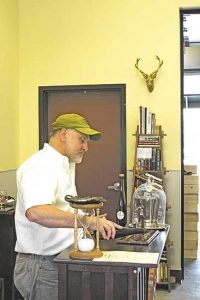 by Catie Joyce-Bulay
When Rusty Figgins starts something, he goes all in. The owner of XO Alambic Distillery has a post-graduate diploma in distilling, teaches craft distilling courses through an institute he helped develop, mentors start-up distilleries and sells a still he designed to distillers across the country.
Figgins, a native of Walla Walla, WA, grew up in a family of farmers and winemakers. After earning an honors degree in Viticulture and Oenology at Australia’s Charles Sturt University, he became a winemaker for many years in the Walla Walla Valley before switching gears to spirits.
“Spirits became a really big interest to me — especially cognac — as a vertical business [and] vertical integration of turning grapes into wine and wine into brandy,” he says. The three functions of one property to make a value-added product appealed to him, says Figgins, who studied process engineering in college. He traveled abroad again to complete a graduate diploma in distilling from the Institute of Brewing and Distilling in London.
Equipped with these new skills, he co-founded the Ellensburg Distillery in 2008, the second distillery to open post-prohibition in the state of Washington. Figgins was instrumental in advocating for the initial legislation that allowed distilleries to operate in the state 10 years ago. After four years with Ellensburg Distillery, he then moved on to co-found Batch 206 Distillery. But after a few years in Seattle, Figgins was ready to move back to the quieter east side of the state with his family, where the wheat fields out-number sky scrapers.
XO Alambic is located in the small town of Dayton, neighboring the Walla Walla Valley wine region. It opened in July pouring Clos Sainte-Rose, a cognac-style brandy he made while with Ellensburg that had been aged for seven years.
“It’s 100 percent aged in French oak and distilled from wine grapes, largely Syrah and Semillion — one of the four grapes used in cognac,” Figgins says. “So it’s got a spiciness and elegance. The spiciness comes from the Syrah.”
Figgins recently procured 500 liter French oak puncheons from a local winery that will be used to ferment an apple juice for his Washington apple brandy, but before that the whole apples will be run through his apple press. The press is a continuous press and the only one currently found in the United States, according to Figgins. The benefit of this model is that it turns the fruit pressing process into one step instead of two, saving valuable time.
After the juice has fermented in the barrels for 21 days, it will be distilled, then aged in the same French oak for about 36 months. Figgins has a strong preference for French oak barrels, noting that even his whisky is aged in French. An unaged clear version of the brandy will be on offer in the interim to showcase the fruit aroma of the base spirit.
In November, two seven-year aged whiskies will be ready for release. Whoop’em Up Whisky, made from a mash bill of 85 percent Washington pale ale barley malt and five percent each of chocolate, crystal and caramel malts, is labeled as an American single malt whisky. This category of whisky is not currently acknowledged by the federal Alcohol and Tobacco Tax and Trade Bureau, but Figgins and other producers are advocating for that to change. Scythe & Sheaf ancient grains whisky is made of 50 percent rye, 10 percent spelt, 10 percent maize, 10 percent emmer and 20 percent sprouted barley. Flavored liqueurs, a gin and a Walla Walla sweet onion vodka are in the works for a 2018 release.
In December, Figgins will bring a new class of students to XO Alambic to continue his craft distilling course onsite through the Spirits Institute of Puget Sound (SIPS). The institute, which he co-founded in 2010, has graduated 320 students. The distillery floor will be transformed into a classroom where students will learn everything from the science of distilling to licensing and regulations, earning them a certificate in craft distilling.
“The workshop isn’t going to make you a master distiller, but it’s perfectly tailored to suit the aspiring craft distiller that wants to get licensed at the federal level. We spend a whole day on licensing,” he says.
The five-day course will end with the production of a batch of spirits made onsite in the Figgins Reciprocator. Figgins put his engineering background to use designing the unique still. XO Alambic houses the prototype and seven others are in use across the United States.
The Figgins Reciprocator is a dual kettle hybrid pot and column still. “It relies on a principle of the reciprocating action that is developed from forcing one positive flow with another positive flow. Simply stated, one has to retreat for the other to advance and the suspension that’s caused by that action causes a greater degree of reflux,” he says.
Another benefit of the still design is its versatility. “Let’s say you want to make a gin, you don’t want to pass all those essential oils through the stages, you just want a simple pot still. This does both,” says Figgins.
Always the innovator, Figgins hasn’t ruled out creating new models in the future.